About 575 Benefit From Free Health Screening In Cape Coast South 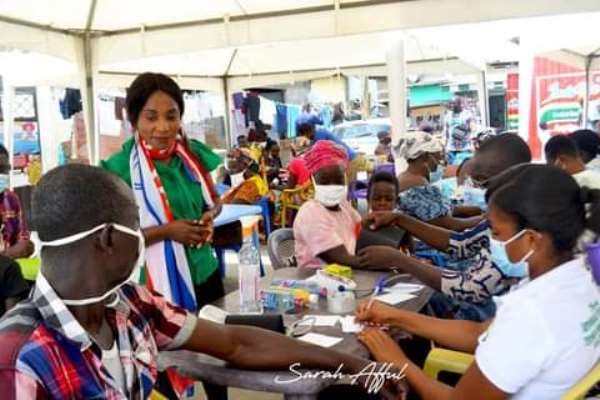 According to Madam Sarah Afful who doubles as the Central Regional Director of the Youth Employment Agency (YEA) and a Member of the Central Regional NPP Campaign Team, the Free Health Screening was to check the health status of the people of the Amissaekyir Community.

In an interview with newsmen at Amissaekyir, Madam Sarah Afful stated that the Free Health Screening was also to support the NPP Parliamentary Candidate for Cape Coast South Constituency, Hon. Ernest Arthur who happens to be the Municipal Chief Executive for Cape Coast Metropolitan Assembly.

"I contacted Medical Personnel from the Cape Coast Teaching Hospital for the screening to check out the health status of the people who use more energy on daily basis due to their activities in the Fishing Community.

Led by Dr. Kofi Amoako-Siaw and Dr. Yawson Gideon, they checked for the Blood Pressure (BP), Hepatitis B, Malaria and others after which medications were given to them.

Each person was given free Eku Juice, snacks and face masks.

According to the Doctors, the commonest disease they diagnosed was hypotension and advised them to be extra careful with their lifestyle adding that food they eat should be their medicine and not vice versa".

Madam Sarah Afful said the exercise will be extended to cover over 2,000 people in the other part of the region as the party prepare for the December 7 General Elections.

She called on the people to appreciate the brilliant performance of His Excellency Nana Addo Dankwa Akufo Addo led NPP Government over the past four years and vote massively for him and to retain him to do more for Mother Ghana.

" Four More For Nana To Do More. Come December 7, let all go to the ballot booth and use our thumb to appreciate President Akufo Addo, he is number One on the ballot paper.

If we are enjoying Free SHS, Free Water, and Electricity among other social interventions, then we must retain the NPP government in power to cushion us Economically.

Additionally, we must also vote massively for our Parliamentary Candidate for Cape Coast Constituency, Hon. Ernest Arthur to become the next Member of Parliament. He is also number One on the ballot paper".

The Director of IT at the Youth Employment Agency, Mr. Frederick Abban commended Madam Sarah Afful for always thinking about the well-being of her people especially those in the Cape Coast South Constituency.

He was extremely happy that the Central Regional Director has successfully organized the Free Health Screening exercise for the Amissaekyir Community.

Mr. Frederick Abban described Madam Sarah Afful as a workaholic person who sees to completion of everything she does successfully

"Madam Sarah Afful is a blessing to YEA because she has raised the image of YEA in the Central Region.

As I speak, over 47,000 have been employed by YEA in the various categories like Youth In Community Police, Youth In Sanitation, Youth In Sports, and others."