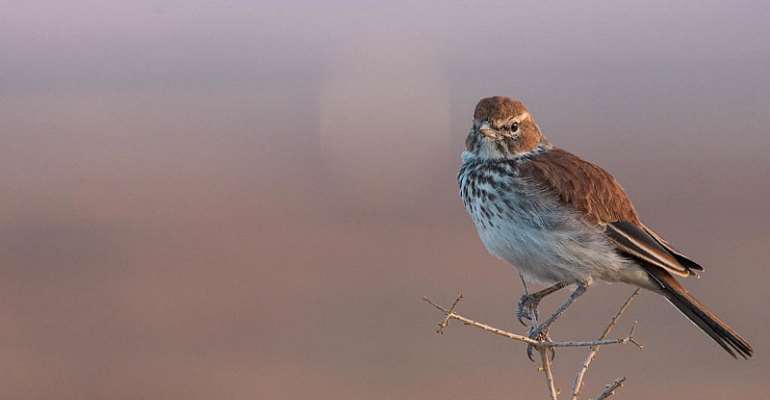 A team of scientists has trained larks in South Africa to hop onto an electronic scale and weigh themselves as part of a new study into the effects climate change is having on the species.

It took two months of extremely difficult and time-consuming work to get eight Red Larks (four males and four females) used to humans and weighing scales, said Ryno Kemp, lead researcher and author of the study.

But in the end “a nice juicy worm did the trick,” Kemp told RFI.

The Red Lark (Calendulauda burra) is a shy, elusive bird found only in South Africa's arid Northern Cape region. It has a streaked breast and reddish brown wings and back that match the red sand dunes of the scrubby, thorn-studded terrain in which it lives.

The study, carried out in the Black Mountain Mine Conservation Area, south of the town of Aggeneys from 2017-2019, saw Kemp and members of his team spending weeks getting first within five metres of individual birds, then two metres, and then coaxing the birds to accept a worm.

Every time a lark took a worm, its human benefactor would whistle so that the lark associated “a food reward with an auditory cue,” explained Kemp, a University of Pretoria zoologist.

Once the larks got used to receiving worms as rewards, a whistle was used to attract them to an electronic scale placed on the ground between tussocks of grass, with worms scattered around it. Eventually smaller worms were placed on top of the scale, and finally on a tiny wooden platform in front of the device, so that the birds were encouraged to stand in the middle of the weighing surface.

A video camera placed beside the scale recorded the reading.

Kemp is a member of the (Hot Birds Research Project HBRP), a network of local and international researchers studying the effects of climate change on birds living in arid areas: places that will bear the brunt of global warming.

Getting birds to co-operate in research has been used before in South Africa. In 2012, another team that was part of the HBRP taught Pied Babblers to weigh themselves. Pied Babblers are another species that lives in dry regions of southern Africa.

But while it took years to habituate those starling-sized birds to electronic scales, Kemp and his team took just weeks to get the Red Larks used to them by spending time each day with individual birds.

Their findings, published in Emu - Austral Ornithology, show that male Red Larks lose up to five percent of their body mass over a 24-hour period when temperatures reach 40 degrees centigrade.

This is not just because it becomes too hot to find food. The birds use “heat dissipation behaviour” like panting to cool down. This is an energetically expensive way to avoid overheating, said Kemp.

The male birds have it worse. Unlike the females, they engage in courtship and territorial displays, which require even more energy.

Currently it is rare for temperatures to exceed 40 degrees for consecutive days in the Northern Cape. But, at current rates of climate change, it is predicted the area will experience that kind of heat for up to 15 consecutive days by 2080-2090.

“Our study shows that birds would become locally extinct, with 48 percent of their current distribution too hot by the end of the century,” said Kemp.

Ongoing research will investigate whether the larks, classified as vulnerable by the International Union for Conservation of Nature, can shift to cooler areas currently outside their range.

The findings are another warning about the need for humans to reduce their impact on the environment, according to Kemp.

“Otherwise, we will see the extinction of various species within the next century, including the Red Lark.”