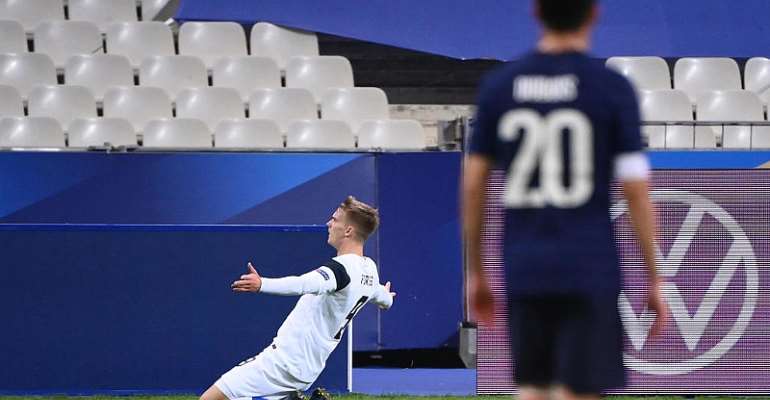 Two goals in three minutes knocked the wind out of France in a surprise defeat at home to Finland on Wednesday night.

After hitting the bar and dominating the first-half, France fell to a sucker punch after 28 minutes at the Stade de France.

Three minutes later, seemingly still reeling from the setback, French defenders allowed Onni Valakari too much space outside the box. The 21-year-old, whose father, Simo, also played for Finland, accepted the munificence to adorn his international debut with a sumptuous strike over Mandanda and into the top left hand corner.

Merited defeat
"We've been given a slap in the face," said France boss Didier Deschamps after the team's first defeat in 13 games. "The Finns were more aggressive, ran more and played for each other.

"The result is as it should be. We deserved to get beaten."

It was Finland's first victory over France in nine attempts and comes as a blow to Deschamps' side who travel to Portugal for Saturday's crucial Nations League match against the League A Group 3 leaders who warmed up for the game with a 7-0 stroll past Andorra on Wednesday night.

The defeat also took the gloss off the international debut of striker Marcus Thuram.

Debut
The 23-year-old is the eldest son of former France defender Lilian Thuram who played alongside Deschamps in the sides that claimed the 1998 World Cup and European championships in 2000.

"It was a good first-half despite the goals," Thuram told TV channel M6.

"I'm trying to learn a lot alongside the other internationals ... and to gain as much experience as possible. I hope that will continue."

It was Thuram's header that rattled the crossbar 15 minutes into the encounter. The Borussia Moenchengladbach striker also flashed a difficult volley over the bar a few minutes later but was ultimately kept at bay by a well-organised Finnish defence.

"He didn't score but he created problems and openings," said Deschamps of Thuram's debut. "For a first appearance, he showed some interesting things."