By Patrick Fort and David Esnault 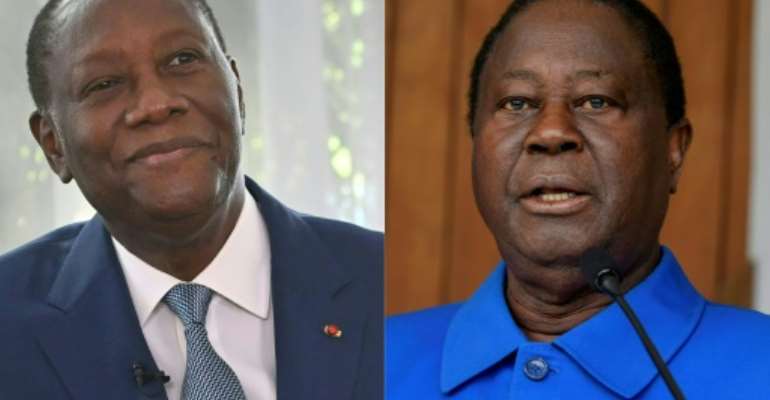 Ouattara, left, and Bedie, right, have been central figures in Ivorian politics for decades. Their relationship has known periods of alliance and bouts of feuding. By Issouf SANOGO (AFP)

Ivory Coast President Alassane Ouattara and his main rival, Henri Konan Bedie, vowed to strive for peace on Wednesday, reporting progress in much-awaited talks on an election crisis that has claimed scores of lives.

"It was a first meeting to break the ice and restore trust," Ouattara said, while Bedie said: "We have been able to break through the wall of ice and the wall of silence."

The two men, who met for around 40 minutes in an upmarket hotel in Abidjan, said in brief comments to the press that further meetings would take place.

"We going to continue to call each other in the coming days and weeks and meet so that the country returns to what it was," Bedie said.

Ouattara said, "Peace is the dearest thing to both of us and to all Ivorians, and we have decided to strive for it."

Their talks are the first since presidential elections on October 31 resulted in a bitter standoff, fuelling fears that francophone West Africa's biggest economy could plunge once more into civil conflict.

Ouattara was declared victor with more than 94 percent of the vote. But the election was snubbed by the opposition, which accused him of breaching the country's two-term presidential limits.

Deadly violence, often tinged by ethnic rivalry, erupted in August after Ouattara announced his bid for a third spell in office, arguing that a 2016 revision of the constitution reset the term counter to zero.

Communications Minister Sidi Tiemoko Toure told reporters that the official toll now stood at 85 dead and 484 injured, many of them in the southeast of the country.

The aftermath of violence in the central Ivorian town of Toumodi. The sign says: 'Youth of Toumodi, you burn shops, restaurants, markets... tomorrow, how do we get by?'. By SIA KAMBOU (AFP)

Of the fatalities, 34 occurred before the election, 20 on voting day and 31 afterwards.

Toure added that 225 people had been arrested, of whom 45 were in custody and 167 had been charged.

The opposition has refused to acknowledge the results of the election, launched what it calls a campaign of civil disobedience and vowed to set up a transitional government to replace Ouattara.

Several opposition leaders, including former prime minister Pascal Affi N'Guessan, the opposition's spokesman, have been arrested, and the homes of others are being blockaded by security forces.

For many Ivorians, painful memories have stirred of the aftermath of disputed elections in 2010.

The face-to-face between Ouattara and Bedie follows a clamour from the UN, EU, the former colonial power France and Ivory Coast's neighbours for efforts to ease the tension.

The country is the world's top cocoa producer and its major city, Abidjan, is a regional business hub.

More than 8,000 people have streamed out of the country to seek refuge in neighbouring states, especially Liberia, the UN's refugee agency said on Tuesday.

More than half of them are children, many of whom have arrived unaccompanied or separated from their parents.

Ouattara, in a speech on Monday, proposed a meeting with Bedie, whom he respectfully described as his "elder."

In its response, Bedie's PDCI party on Wednesday set down several conditions for such talks, including the lifting of the home blockades and the end of judicial procedures against arrested leaders.

The blockade around Bedie's home had been lifted as of early afternoon on Wednesday, but was still in place around the home of fellow opposition leader Assoa Adou, Adou told AFP.

Ouattara and Bedie have been central figures in Ivorian politics for decades, with each claiming the mantel of Felix Houphouet-Boigny, the highly popular first post-independence president.

The venue for their meeting, the Golf Hotel in Abidjan, has historic resonance.

It was where Ouattara, as president-elect, set up his headquarters during the 2010-11 crisis, when the incumbent president, Laurent Gbagbo, refused to step down after being defeated at the ballot box.

Ouattara's erstwhile allies at the hotel included Bedie, who fell out with Ouattara in 2018.