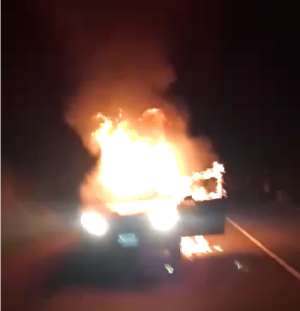 A viral video making rounds on social media suggests that a group of Nigerian nationals believed to be businessmen who were returning from a business trip lost their 4x4 car to fierce flames.

The unfortunate incident happened in Adetsebui in the Akatsi South Constituency of the Volta Region.

No casualties were recorded but the driver of the car and his companions cried uncontrollably in despair watching on as the four-wheel-drive burned into ashes.

Even though details about the incident and occupants of the car aren’t yet clear, Mike Azegi, an eyewitness said the car got one of the tyres overheated resulting in blasting in the middle of the journey and started burning.

“I have called Akatsi fire service for their support yet they told me their car is not working,” Mike Azegi wailed as he spoke to the media.

"It took several hours for the Dzodze fire service to come in to help us deal with it," he added.

According to him, bystanders rushed to the scene tried to put out the flames with a fire extinguisher, while others poured sand in the flames but all efforts failed.

There haven’t been any official details of the incident yet from the police yet.