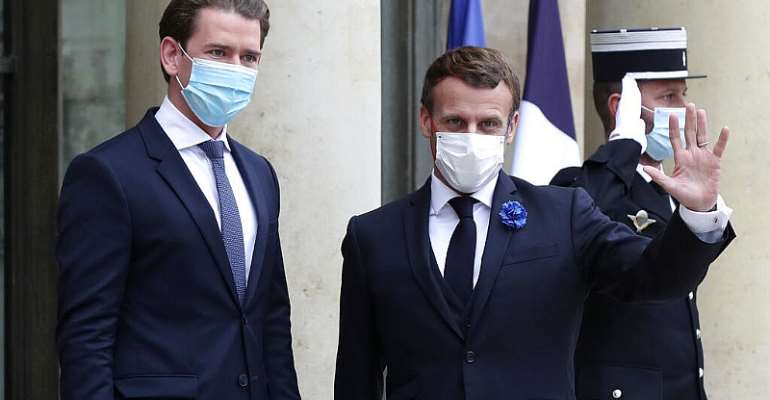 French President Emmanuel Macron said the European Union would study how to reform its free-movement Schengen area in order to assure security in response to a series of terror attacks in France in Austria in recent weeks.

Macron said recent attacks in France and Austria underlined the need to toughen European security without sacrificing the principle of free movement near the heart of the European Union.

“Public opinion in states confronted with a terrorist threat will not be able to accept keeping our borders open for long if we do not deeply reform the Schengen area,” the French president said after a virtual mini-summit with five other European top officials.

“We saw it in spring in the context of the pandemic and we see it now with terrorism.”

Right to asylum 'misused'
Macron made the remarks at the French presidential palace in Paris alongside Austrian Chancellor Sebastian Kurz, who met with Macron before joining remote talks with other leaders.

Macron called the summit to seek an EU-wide response to security threats after a series of attacks that killed four people in central Vienna, three at a church in the French city of Nice and a teacher at his school near Paris.

Detains were to follow in the coming days on reconsidering the oversight and administration of the zone, as well as tightening external borders, a sign that leaders will seek to toughen migration and patrolling policies.

“We must not confuse the fight against illegal migration and terrorism, but we must also face the links that exist,” Macron said.

The sustects in attacks near Paris and in Nice were a Chechen with asylum status and a Tunisian who came to France on a migrant vessel via Italy, respectively.

“In all of our countries we are witnessing a misuse of the right to asylum” Macron said, referring to human traffickers, criminal gangs and people from countries “which are not at war”.

Online hate speech
Macron urged a “rapid and coordinated” European response to terror attacks that should focus on “the development of common databases, the exchange of information or the strengthening of criminal policies”.

Macron said the leaders discussed online radicalisation and a need to crack down on “terrorist propaganda and hate speech”.

“The Internet is a space of freedom, our social networks too, but this freedom exists only if there is security and if it is not the refuge of those who flout our values or seek to indoctrinate with deadly ideologies,” he said.