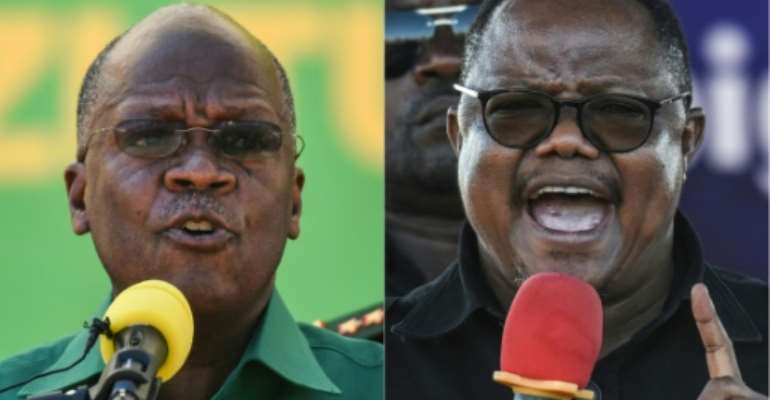 Arrests of opposition leaders and followers began on the eve of the October 28 poll, she said in a statement, citing reports from the country.

"At least 18 reportedly remain in custody," she said, adding that she was disturbed by accounts of continued intimidation and harassment.

"The tense situation in the country will not be defused by silencing those who challenge the outcome of the elections, but rather through a participatory dialogue," Bachelet warned.

"I urge the Tanzanian authorities to respect and facilitate exercise of the rights to freedom of expression and of peaceful assembly."

President John Magufuli won a crushing 84 percent of the vote, in an election that the opposition says was stained by massive fraud.

His Chama Cha Mapinduzi (CCM) party took 97 percent of the parliament seats up for grabs.

The opposition called for street demonstrations against the results, but their leaders were swiftly detained and a heavy security presence deterred potential protest action.

Lissu, who was himself detained and questioned after dismissing the election as a sham, said Tuesday he was leaving Tanzania for Belgium, but did not specify why or for how long.

"I am on my way to Belgium. At the airport right now," Lissu told AFP in a brief comment on WhatsApp.

Lissu had only returned to Tanzania in July after three years in Belgium recovering from 16 bullet wounds sustained in what he said was a politically-motivated assassination attempt.

"Wishing him good health and a quick return so that he can continue to play a vital role in Tanzania's political life," he posted on Twitter.

On Sunday, a former opposition legislator, Godbless Lema, sought refuge in Kenya with his wife and children, his lawyer said.

He was arrested by local police and then released.

"I received information that my life was in danger," Lema told reporters as he left the police station in Kajiado, near the border.

"I could not ignore this information, because I have buried many of my friends and others are still missing. I acted fast and fled."