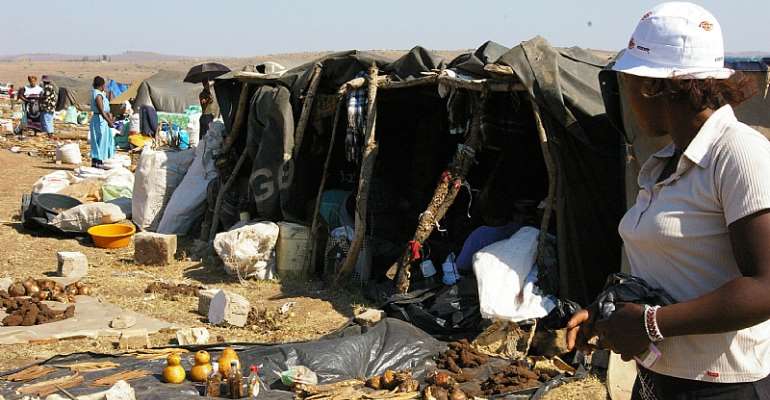 Mona Market in KwaZulu-Natal, South Africa operates on the third week of every month when traders set up temporary dwellings for the four days. - Source: Gary Stafford

African traditional medicine and its practices were prohibited under the pretext of witchcraft in South Africa by the British and later the apartheid government . This led to secrecy in the practice and a lack of infrastructural planning to support it.

As a result, traditional healthcare practices are largely informal and unregulated. This raises questions around accessibility and patient safety, as well as the accountability of healers. Traditional health practices make use of symbolic rituals and natural products, including local plants. They also follow certain cultural rules about privacy. And they require specific spatial qualities in terms of scale, sequencing, light and materials.

In 2007 the South African government gazetted the Traditional Health Practitioners Act to officially recognise the practice of traditional medicine. But little has been done to develop formal spaces for traditional healing practices – especially in an urban context. Most healers still practise in their houses where there is little privacy for patients and their families are exposed to ill people. Others use more private backrooms. But these spaces aren't designed for the practice of traditional medicine.

The spaces where traditional medicine is practised are important because they assist with the healing process . These spaces play an indispensable role in helping patients get better. Different to biomedicine, African traditional healing is holistic : besides the patient's symptoms it considers the person as a whole and their social relationships. During the consultation, landscapes, buildings and their elements, such as materials and plants, gain symbolic meaning to the patient, through their use by the healer. The setting, the herbal component and the dialogue with the healer provide a physical comfort and a sense of cultural belonging to the patient and all these components combined are responsible for the healing.

For this reason there's a dire need for architectural design insight into the best qualities for spaces that could house these cultural rituals of healing. Guidelines are needed for the suitable design and construction of landscapes and buildings for traditional health practitioners in South Africa – in the same way as the country has guidelines for clinics and hospitals.

Proper facilities supported by well researched cultural principles for layout and design will go a long way to improving the image and perception of the practice of traditional medicine. Bringing together the perspectives of architectural design and the cultural use of medicinal plants, we are working on research which aims to develop guidelines for the design and construction of landscapes and spaces for traditional health practitioners in South Africa

Most rural villages in South Africa continue to have resident traditional healers. Some of these villages even have large traditional markets that remain functional, such as Mona Market in Nongoma, KwaZulu-Natal .

But traditional health practice isn't relegated to rural areas only.

It is widely practised in major cities such as Durban and Johannesburg. Due to demand, some municipalities have donated infrastructure for the healers to practise and sell their traditional medicine. Examples of state-funded infrastructure include the Mai-Mai and Faraday markets in Johannesburg and Warwick Junction in Ethekwini, Durban. In the country's capital, Pretoria, healers trade and consult freely in informal markets and a few small private businesses such as in Marabastad , near the city centre.

But they are not ideal as they were initially designed for other purposes, such as horse stables in the case of Mai-Mai Market. They lack the basics needed for trade and hygiene, such as water, good lighting and ablutions. In addition, the spaces don't reflect African cultural identity through their design and material qualities. These qualities, which include elements such as hierarchy, scale, order, use of light, colour and artefacts, are essential design considerations for the healing experience in traditional health practices .

Urban public spaces in South Africa were, and often still are, either Eurocentric in design or designed in a modernist international style. These spaces were not designed for African lifestyles and needs. This can be attributed to the legacy of apartheid ideals and spatial planning : to keep people apart on the basis of race and ethnicity and discourage the permanent presence of black people in cities.

Through strong commitment to funding and research, the governments of China, India and Japan have developed and institutionalised their respective traditional healthcare systems. In these countries, the practice and trade of traditional medicine and the design of its buildings and spaces are largely regulated .

It must be borne in mind that biomedicine used to be traditional medicine. But it developed through continued research and funding. The design guidelines of biomedicine facilities, including clinics and hospitals, have been well supported in South Africa. But traditional health practitioners are poorly regulated and thus undermined by the biomedical practitioners.

Properly designed facilities could provide comfortable access to traditional medicine for all members of society. Healers who have been previously marginalised deserve to practise in facilities that embody their world view and identity. To take rightful ownership of the process, it is important for them to be heard and involved in the development of design guidelines.

Christina Breed receives funding from the National Research Foundation (NRF) for research but it is not related to this article.

Gary Ivan Stafford receives funding from the National Research Foundation (NRF) and the South African Medical Research Council (MRC), but none of this funding is related to this article.

John Molebatsi does not work for, consult, own shares in or receive funding from any company or organisation that would benefit from this article, and has disclosed no relevant affiliations beyond their academic appointment.

By John Molebatsi, PhD candidate, University of Pretoria And