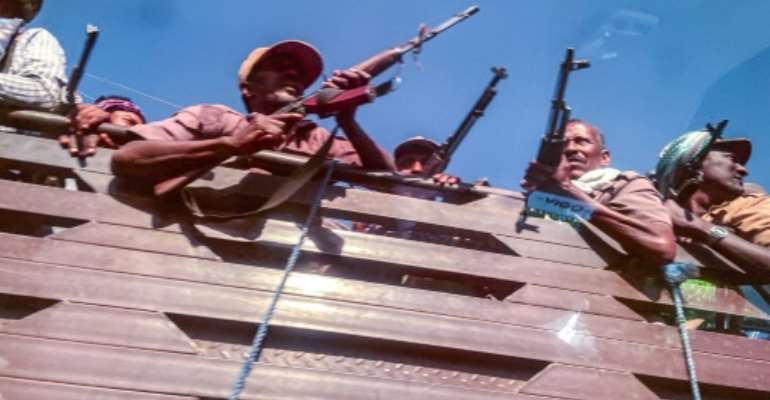 Tigray has been under a communications blackout, making it difficult to weigh competing claims about casualties and who holds what territory. By EDUARDO SOTERAS (AFP)

Prime Minister Abiy Ahmed said Tuesday the end of military operations in Ethiopia's north is "coming within reach", as the African Union called for an immediate ceasefire and thousands fled the violence into neighbouring Sudan.

The prime minister sent troops and air force jets into the northern region of Tigray last week in a campaign against the ruling party there, which has been at odds with Abiy's government for months.

Tigray has been under a communications blackout ever since, making it difficult to weigh competing claims about casualties and who holds what territory.

Abiy said operations against the TPLF were "proceeding as planned".

"Operations will cease as soon as the criminal junta is disarmed, legitimate administration in the region restored, and fugitives apprehended & brought to justice -- all of them rapidly coming within reach," he posted on Twitter.

But Moussa Faki Mahamat, chairman of the African Union Commission, said on Tuesday that the fighting must stop, and urgent dialogue was needed "to seek a peaceful solution in the interests of the country".

"The Chairperson appeals for the immediate cessation of hostilities and calls on parties to respect human rights and ensure the protection of civilians," he said in a statement, offering the full support of the 55-member bloc for an Ethiopian-led resolution.

The international community has expressed concern about the potential for a drawn-out conflict in Africa's second most populous nation, pitting the powerful federal army against the large, battle-hardened military of the Tigray region.

UN Secretary-General Antonio Guterres spoke with Abiy at the weekend after publicly calling for the immediate de-escalation of tensions, saying the stability of Ethiopia was critical for the entire Horn of Africa region.

Much of the fighting has reportedly been concentrated in western Tigray, near Ethiopia's borders with Sudan and Eritrea.

Thousands of civilians and some soldiers have already fled Ethiopia westward into Sudan, said Alsir Khaled, head of Sudan's refugee agency in the eastern border town of Kassala.

"Around 3,000 refugees crossed over," he told AFP, adding that around 30 Ethiopian soldiers who fled had turned themselves over to Sudanese authorities.

The UNHCR said Tuesday it was aware that "more than several hundred" asylum seekers had entered eastern Sudan and were being provided assistance, spokesman Babar Baloch said.

State media reported Tuesday that the Ethiopian military had "completely captured" an airport about 60 kilometres (35 miles) from the northwest town of Humera, close to the border with Sudan and Eritrea.

But the TPLF-controlled Tigray Mass Media Agency said Humera's population was "undertaking its normal peaceful activity" and that "information being disseminated by fascist Abiy Ahmed is far from the truth".

The western town of Dansha was under federal control when AFP journalists travelled there on Monday, but it has been impossible to verify the military's claim that it controls other towns in the area. 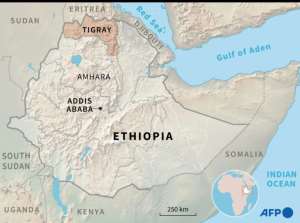 Map of Ethiopia locating the region of Tigray. By Simon MALFATTO (AFP)

The Ethiopian Broadcasting Authority on Tuesday informed journalists accredited in Ethiopia that they would need to obtain a "supporting letter" before travelling to Tigray as well as "bordering conflict zones and different parts of the country".

It said the measure was intended "for the safety of journalists and to get cooperation from local administrations and military officials on the ground."

The TPLF dominated politics in Ethiopia for nearly three decades before Abiy came to power in 2018.

Under Abiy, Tigray's leaders have complained of being unfairly targeted in corruption prosecutions, removed from top positions and broadly scapegoated for the country's woes.

Abiy has accused the party of seeking to derail his reformist agenda, and sponsoring and arming militias bent on derailing the democratic transition he has pursued.