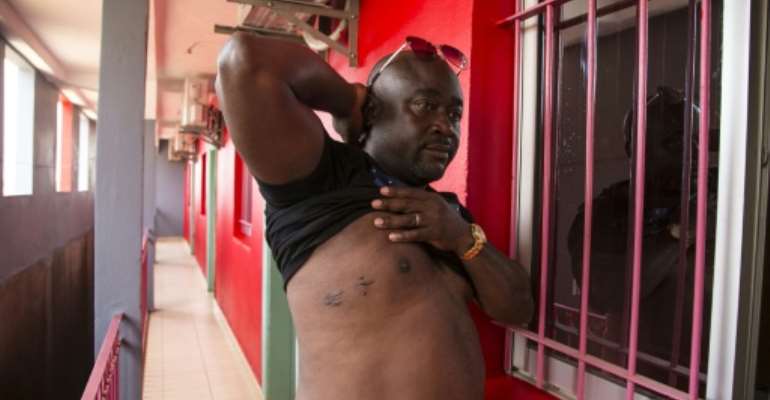 "We were sitting in a bar that evening when about 60 people burst in," says Appolin Tchanga, a 43-year-old house painter.

"I was stabbed with a knife -- I came close to death."

Changa bears scars on his chest, inflicted when a gang swept through a neighbourhood in Douala, Cameroon's economic capital, in June.

Gang violence in the city is on the rise both night and day, with roving bands touting machetes, clubs, knives and even screwdrivers to terrorise and steal.

"The problem is rising," said a police officer who asked not to be named. "If nothing is done, they are going to be taking entire districts hostage."

The toll of casualties from the gang raids is unknown, but last month alone, at least four districts suffered such attacks.

"They beat up traders, stole goods and people's possessions," a vendor said in the rundown Ndokoti district.

Traders in the Ndokoti crossroads district say they were beaten up and goods were seized by a marauding gang last month. By - (AFP)

"People stampeded. I ran off like everyone else and hurt myself," said another trader, who gave his name as Prince.

Angry, fearful and frustrated at what they see as official indifference, locals are taking matters into their own hands.

In the lively Deido district, a raid was recently carried out by two dozen youths mainly armed with knives, according to Nicolas Njoh, general secretary to the chief of the district, which includes several villages.

"They smashed up shops. They snatched women's handbags," Njoh says.

But when gang members made a second assault on the area, local residents were ready for them, Njoh explains.

"When the signal was given, all the children and the mothers moved out. The gang members were hunted down," he says, showing a photo of a motorbike driver who had been caught.

The district had already formed a local self-defence council, but Njoh says that as gang violence has increased, officials are looking to install "a watchdog committee in every village for a strong counter response."

University of Douala psychologist Erero Njiengwe says that helping young delinquents to retrain is a smarter tactic than simply jailing them. By - (AFP)

After the wave of attacks in Deido, 39 delinquents were rounded up and jailed, says Samuel Dieudonne Ivaha Diboua, governor of the Littoral Region where Douala is the chief city.

Not everyone agrees with a lock-them-up approach.

Most of the people who operate in gangs "are young," said Erero Njiengwe, a psychologist and researcher at the University of Douala.

"They come from a delinquent generation -- they are out of work, abandoned, mistreated in a certain way."

A better approach would be "to identify them and get them to turn towards productive activities rather than favouring repression".

Even if Nana-Addo changes constitution and contest, Mahama w...
24 minutes ago