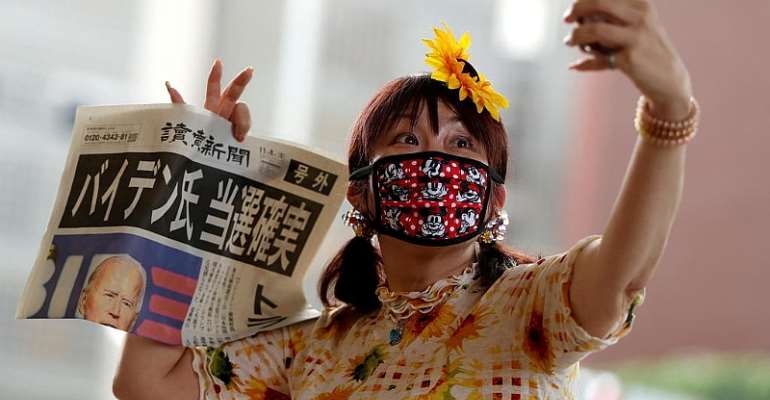 Newspapers around the world hailed the election of Joe Biden and his message of unity following a turbulent four years under the Trump Administration. While many were abuzz with speculation on what Biden's historic victory will mean for US foreign policy, others chose to have some fun. Here's RFI's international press round up.

The main headline in The Sydney Morning Herald sums up the whole story with antipodean aplomb: "As America prepares for a new dawn, Trump mulls legal option while Biden says it's time to heal".

The second story on the same front page pays tribute to Kamala Harris, the woman who will be vice president: "Harris ushers in a new era for women around the world". You can't say fairer than that.

German news magazine Der Spiegel on Sunday reprised its controversial 2016 cartoon cover of Trump decapitating Lady Liberty, though this time with a sister cartoon of a mask-wearing Biden restoring her severed head — alongside the headline "Make America Great Again".

Here in France, the main story on the website of Le Monde is a mouthful: "Pro-Trump social networks divided between denial, discouragement and a call to arms".

The centrist Paris daily seems to take seriously the efforts by various Trump-affiliated action groups like Diamond & Silk or For America, which count 10 million supporters between them, to fight the media-led élites who have "stolen" this election.

On the Diamond & Silk Twitter account, alongside a funereal image of Donald Trump, you can read this: "It's time for the 'UPRISING'. Fight back against the steal. President Trump exposed the swamp, now it's time for him to pull the damn plug. Let's help him remove all of the rats that's been clogging the pipes!

What's a mixed metaphor and a grammatical error when the fate of democracy is at stake?

Over at For America, they are calling for an end to debate, reminding the faithful that it was for situations like this that the second amendment to the American constitution, which allows the private ownership and use of firearms, was voted.

French right-wing daily Le Figaro, meanwhile, gives pride of place to the Vendée Globe yacht race, an event in which the solitary skippers of 33 vastly expensive boats will avoid Covid-19 restrictions, curfews and masks for the next couple of months by trying to sail around the world.

Le Figaro does mention Biden, well down the front page, saying that Trump has still not reacted officially, three days after the election ended.

In Ireland, according to the Irish Times, they've already discovered that Joe Biden's great-great-great grandfather, Edward Blewitt, came from the western town of Ballina in County Mayo.

Messages of congratulations as world leaders react to Biden-Harris win

They've also discovered champagne and corks were said to be popping in the town's Market Square. Which leads to questions about social distancing and when the next cow will be milked in Ballina.

Over in Italy, Biden has to play second fiddle to the football match between Atalanta and Inter Milan on the front of daily Corriere della Sera. But he gets honourable mention, for his generosity and immediate attack on the Covid-19 crisis.

And finally the Chinese People's Daily in Beijing gives pride of place to a president, but he's not called Biden.

There is possibility of a lockdown, other restrictions – Opp...
20 minutes ago