Egypt's GDP grows despite pandemic, but so does poverty 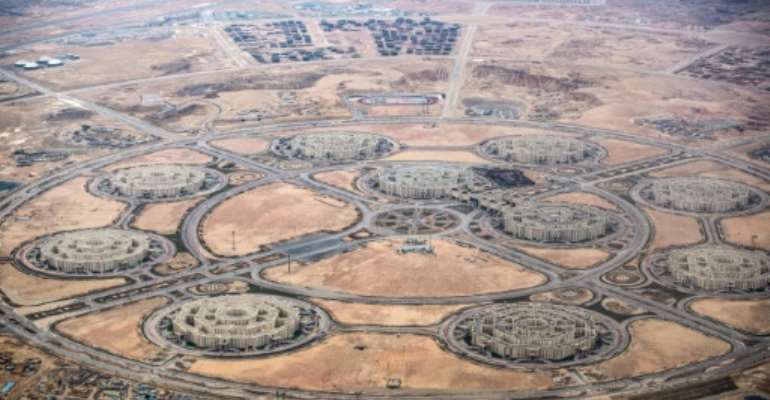 Critics questions how much of the GDP growth in Egypt is driven by ostentatious mega-projectssuch as a new administrative capital being built in the desert. By Khaled DESOUKI (AFP/File)

Despite the pandemic and tourism collapse, Egypt is projecting healthy economic growth this year, even as one third of the Arab world's most populous country remains mired in poverty.

Critics question, however, how much of the GDP growth is driven by ostentatious mega-projects, such as a new administrative capital being built in the desert, financed by ballooning debt that will have to be repaid.

The International Monetary Fund in September predicted economic growth of 3.6 percent for 2020. Although lower than earlier forecasts, this still makes Egypt the only North African economy set to expand this year.

At the same time, almost one third of Egypt's more than 100 million people live below the poverty line, defined as surviving on less than $2 a day, according to the most recent data, for 2017-18.

Egypt's government initially predicted six percent GDP growth for the fiscal year 2020, which ran from early July 2019 to the end of June 2020.

Toward the end of that twelve-month period, the novel coronavirus outbreak hit, infecting more than 100,000 people in Egypt since and killing over 6,000 of them, according to official data.

The public health crisis forced lengthy lockdowns and hit the tourism sector of the country famed for its archeological heritage and Red Sea beaches, at the cost of countless livelihoods.

Around 2.7 million jobs were lost in April-June, mainly in retail and wholesale, manufacturing, tourism, transport and construction, pushing official unemployment to 9.6 percent, according to World Bank data.

One of the many people left jobless was a hotel worker who gave his name as Gaber, 36, from southern Egypt, and who was laid off in April by a Red Sea resort suddenly devoid of holiday-makers.

Gaber told AFP he is hoping desperately to find another job as Covid-19 confinement measures are eased, explaining that "I support my four children, my wife and my mother".

Almost one third of Egypt's more than 100 million people live below the poverty line and survive on less than $2 a day and due to jobs lost because of the coronavirus pandemic food banks have been giving people handouts. By Mohamed el-Shahed (AFP/File)

Some economists argue the solid GDP growth is the fruit of tough reforms taken since President Abdel Fattah al-Sisi took office in 2014, including austerity measures and a devaluation of the Egyptian pound.

Ahmed al-Safti, managing director of the Delta research centre in Cairo, said the currency devaluation by nearly 48 percent in November 2016 spurred investment and helped improve the balance of payments.

Sisi's government has touted the tough measures as essential to revitalising an economy that had taken multiple hits since the 2011 popular uprising that toppled longtime ruler Hosni Mubarak.

Tourism revenues have grown in the years since, and reached a new record of $12.6 billion in 2018-19. Remittances from Egyptians living abroad also hit a record level, of about $28 billion in 2019-20.

But the wealth has been distributed unevenly and many are missing out. Official figures show that 32.5 percent of Egyptians lived below the poverty line in 2017-18, many impacted by the austerity measures.

"The reforms came at a price," said Safti, "but this price would have been far higher if the government had not implemented the reforms."

Four years since Egypt devalued its currency and took unpopular austerity measure the economy has seen a steady growth but many Egyptians are struggling to make ends meet. By KHALED DESOUKI (AFP/File)

But Sarah Smierciak, an independent political economy analyst in Cairo, argued these "are a drop in the ocean, and they fail to reach millions in need".

She also criticised Egypt's focus on ambitious mega-projects, such as a new administrative capital being built outside Cairo, replete with new ministry buildings and hundreds of thousands of flats, an estimated cost of tens of billions of dollars.

Smierciak believes such projects are unlikely "to generate large and sustainable returns" while being "largely financed by (foreign) debt", which soared to $111.2 billion in 2020 from $48 billion in 2015.

"The numbers increasing the GDP now will have to be repaid with interest in the future," she said.

Gaber, the unemployed hotel worker, also feared that these projects "may provide job opportunities to some, but a large segment of the people will not benefit".