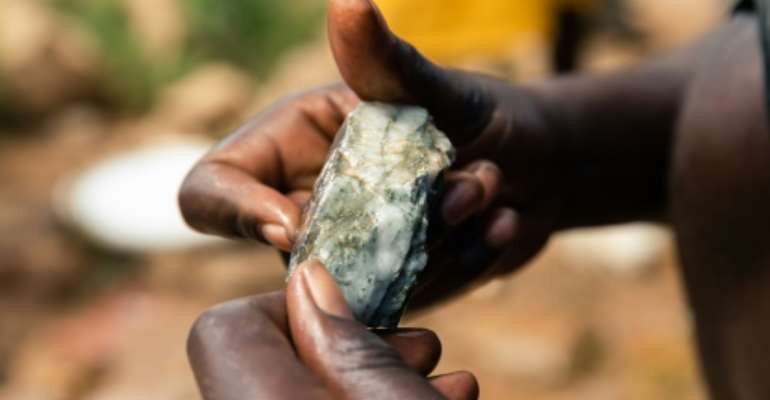 Reeling from decades of economic mismanagement, Zimbabwe is banking on gold to shore up revenue and tackle the upshots of rampant hyperinflation, corruption and coronavirus restrictions.

Global gold prices have surged more than 30 percent this year, topping a record $2,000 (1,700 euros) an ounce in August, as the precious metal became a safe haven for investors in the face of Covid-induced volatility.

The government is eyeing gold as a possible magic bullet for an economy forecast to contract by a tenth this year, according to the International Monetary Fund (IMF).

According to official figures, gold production in the first eight months of 2020 rose 10 percent, driven especially by output from small-scale miners.

The sector already accounts for 60 percent of Zimbabwean exports, raking in around $1 billion a year, and represents half of the southern African country's foreign direct investment.

"Mining will be a leading sector in sustaining high and shared growth," Finance Minister Mthuli Ncube said in a pre-budget statement last month.

Gold is expected to bring in $4 billion a year by 2023, followed by platinum at $3 billion, although the government gave few details about how such a huge increase from current figures will be achieved.

Not all that glitters

And experts warn that the ambitious plans face big hurdles.

One is that miners, particularly small-scale miners, are not happy with the system which requires them to sell their gold to the state-owned buyer, Fidelity Printers and Refiners.

Under regulations set by its owner, Zimbabwe's central bank, a maximum of 55 percent is paid to small-scale miners in foreign currency, with the remaining 45 percent in Zimbabwean dollars, which is notorious for its weakness.

The government has promised new regulations to stem gold leaving the country illegally.

Even so, policy inconsistencies and delayed payments for bullion deliveries are frustrating the few international mining companies operating in the country.

Mining sector "growth will be impeded by foreign exchange shortages and a weakening national currency, as well as rampant hyperinflation," Besseling told AFP, adding that investors were likely to be put off by economic and political instability.

"Companies are struggling to secure inputs, and export capacity is already at a limit due to poor infrastructure."

Mining giant RioZim, the country's top producer, halted production in June after failing to be able to cover its operational expenses.

For the moment, however, the government has yet to get a handle on gold being smuggled out of the country.

Artisanal miners, many of whom have joined the gold rush to escape poverty, are thought to be the source of much of the smuggled gold.

Last month, the head of Zimbabwe's artisanal and small-scale mining federation was busted with six kilos (13 pounds) of gold worth over $360,000 (305,000 euros) in her hand luggage just before boarding a flight to Dubai.

Henrietta Rushwaya, 53, is now facing smuggling charges as prosecutors accused her of being part of a wider syndicate.

A miner carries a load of ore at Manzou Farm, owned by Grace Mugabe, the wife of former president Robert Mugabe. By Jekesai NJIKIZANA (AFP/File)

"This is a classic example of organised crime because of the manner in which the execution of the offence was carried out," prosecutor Garudzo Siyadhuma said during a court hearing last week.

Six other people have been arrested over the case. One of them, an airport intelligence officer, allegedly mentioned President Emmerson Mnangagwa's wife and son as the owners of the contraband.

Prosecutors and government officials have accused him of namedropping to mislead investigators and evade justice.

The scandal is suspected to be just the tip of a gold smuggling iceberg diverting hundreds of millions of dollars out of the country.