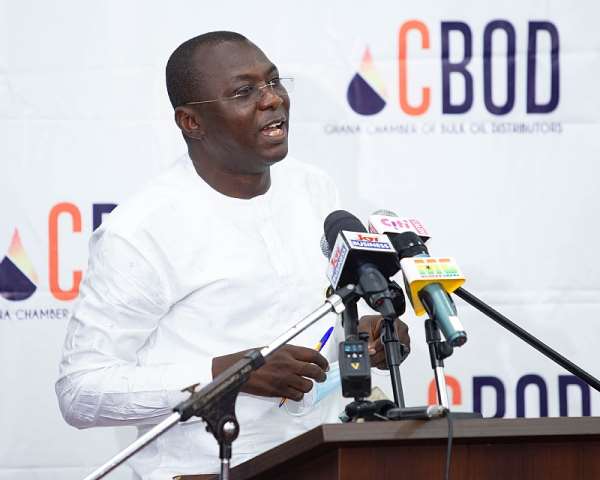 The Deputy Minister for Energy in charge of Petroleum Dr Mohammed Amin Adam says Ghana is forced to cough up more than 500million dollars every year to pay for excess capacity from the Take or Pay power agreements.

He blamed the situation on the "unsolicited power purchasing agreements" the erstwhile Mahama administration signed with the Independent Power Producers (IPPs) at the time.

The worrying aspect, the sector minister indicated, is that less than 40percent of the Take or Pay agreements is being been used by the State.

According to him, per the terms of the agreement, the country still pays for the remaining power it is not using or has not been utilised.

He added that the unused power contributed to the high cost of electricity the NPP government inherited from the previous NDC.

"40percent of the Take or Pay power purchase contracts were not used. Ghana now pays almost 500million dollars annually for excess capacity that it is not using which we have committed to.

Renegotiated PPAs to Take and Pay

Speaking at an event dubbed 'The Energy Manifesto Town Hall ' organized by the Chamber of Bulk Oil Distributors (CBOD) and its partners, Dr. Amin Adam said the governing New Patriotic Party (NPP) through his outfit renegotiated existing power purchasing agreements from Take or Pay to Take and Pay to put an end to the payment of capacity charges.

According to him, government has renegotiated the contract for Quantum Gas projects, Takoradi LNG, Ameri and CENIT IT to reduce the burden on the national purse.

He noted that Ghanaians are now enjoying low electricity tariffs and stable power under the Akufo-Addo government due to the renegotiated power purchasing agreements which largely accounted for the high cost of electricity under the previous government.

"We have for example renegotiated the CENIT IT contract which has saved us 31percent of the cost of power they had to produce. Also, we have been able to convert it from Take or Pay to Take and Pay which means if you don't use it you don't pay for it," he posited.

The sector minister stressed that even though negotiations are ongoing on other IPPs contracts government has also placed a moratorium on power purchasing agreements inorder to enable it utilise the excess power in the system.

Dr Amin Adam indicated that between 2010 and 2016, electricity tariff was increased over an accumulated 268percent.

According to him, the NPP government few months after assuming office in 2017 reduced levies on electricity to give Ghanaians some respite.

The sector minister added that electricity tariff for industries was reduced by 30percent, commercial by 25percent and residential by 17.5percent in 2018.

He indicated that gas which is an input cost of electricity, government renegotiated the domestic gas price from $8.8 per MMBTU to $6.08.

According to him, the government has restored the price of Jubilee gas from $3 to zero.

The sector minister posited that all these become possible through the implementation of the Energy Sector Recovery Programme that saw a conscious reduction in the cost of electricity in the country.

"Electricity tariffs were unaffordable. Cost of electricity was very high and you could relate to the number of time tariffs were increased between 2010 and 2016 which led to an accumulated increased in tariffs of over 268percent.

"Over the next 5years, we plant to strengthen the financial performance of the energy sector through what we termed as Energy Sector Recovery Programme. we started of in 2017 by reducing levies on electricity. For example, we reduced the national electrification scheme levy from 5percent to 3percent, reduced the street lighting levy to 5percent to 2percent.

"In 2018, we reduced the electricity tariff for industries by 30percent, commercial by 25percent and residential by 17.5percent. Our friends from the other side were worried and even ridiculed us why we were reducing tariffs. My friend Bawa even said the reduction will take back to dumsor but am sorry to tell them we have not gone back to dumsor since the Akufo-Addo government reduced the electricity tariffs.

"We have renegotiated the domestic gas price $8.8 per MMBTU to $6.08. It was very difficult to renegotiate because of them are long term commitment but we managed to negotiate the price down. So gas as an input cost needed to be looked at all time because it is a pass through cost," he emphasised.

The sector minister stressed that President Akufo-Addo provided electricity relief to households and businesses hard-hit by the covid-19 pandemic this year.

The President had, on Thursday, April 9, 2020, announced the absorption of the entire electricity bills of consumers who consume up to 50 KWh, while residential and commercial consumers were to benefit from a 50 per cent discount of their bills.

Dr. Amin Adam said the relief which took effect on May 1 was meant to ameliorate the pain and hardship Ghanaians were facing with covid-19 fight.

"In the covid-19, President Akufo-Addo provided electricity relief to Ghanaians to cushion them during the hardship caused by the pandemic. It was a costly intervention but it was also necessary to bring the economy back and support industries to recover and grow the economy at accelerated levels," he stated.

All of these interventions, he emphasised, is the reason Ghanaians under the governing NPP are enjoying relatively cheaper electricity as compared to the NDC regime which impoverished many Ghanaians including businesses that had to relocate to other countries for cheaper sources of electricity to operate profitably.

He intimated the NPP government are the better managers of the power sector are as a result of the right policies it implemented over the last four years.