US Election 2020: Who Is Ahead In The States Still Counting? 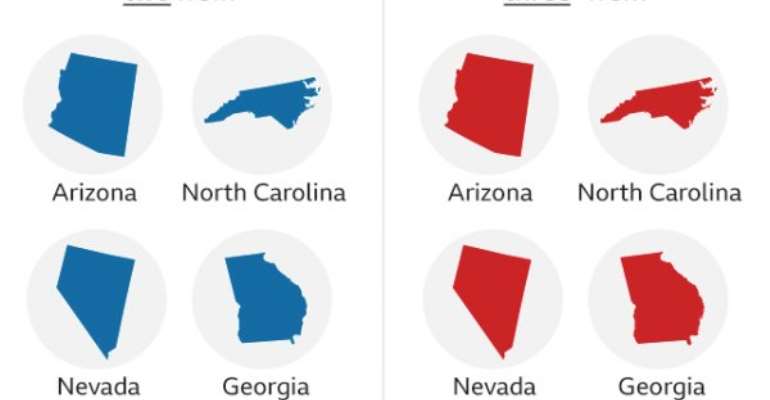 The race for the White House is coming down to who wins the few remaining battleground states - Georgia, Pennsylvania, Nevada and Arizona.

A win in just Pennsylvania or two of the other four remaining states would be enough to confirm Mr Biden as president-elect, barring any legal challenge.

How many votes are still to be counted: As of Friday evening, 102,541 votes remained.

Where are these votes? The votes to be counted are absentee ballots in Philadelphia, the state's largest city, and Allegheny county, home to Pittsburgh, counties won by Hillary Clinton in 2016, so mostly Democratic votes.

When will we learn more? Friday is the last day that Pennsylvania can accept mail-in ballots postmarked on or before Election Day. State officials have said it could take more days to complete the count.

How many votes are still to be counted: Georgia Secretary of State Brad Raffensberger said earlier on Friday that some 8,000 military absentee ballots were still in the mail and would only be counted if they arrived by the end of the day.

Where are these votes? The votes being counted are postal ballots mostly from Atlanta and Savannah, which have skewed heavily toward Biden.

When will we learn more? Raffensberger announced on Friday that the state's presidential contest will go to a recount, so we could be waiting a while.

Where are these votes? They're from all over this diverse state, but most are in the area around Phoenix.

When will we learn more? State officials are due to provide updated numbers on Friday evening local time - we don't know if they'll prove decisive.

How many votes are still to be counted: Officials say there are tens of thousands of votes remaining.

Where are these votes? Many are from Clark County which includes Las Vegas, and the majority of them are postal ballots.

When will we know more? A clearer result will likely come by the weekend.