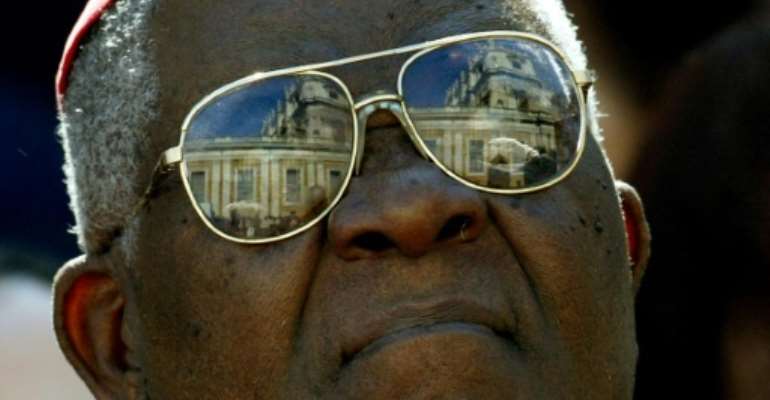 Christian Tumi has led efforts to defuse the crisis in anglophone Cameroon. By PAOLO COCCO (AFP/File)

A 90-year-old archbishop was briefly abducted in a western Cameroon region gripped by conflict between anglophone separatists and security forces, the archdiocese said on Friday.

Christian Tumi, an archbishop emeritus and retired cardinal who has frequently sought to mediate in the crisis, was kidnapped on Thursday evening on a road near Kumbo in the Northwest Region, it said.

He was released on Friday along with his driver, said Samuel Kleda, archbishop of the port city of Douala.

But around 10 other people who were also seized with them have not been freed, a local official who requested anonymity told AFP.

Among those travelling with Tumi was a local leader, Sehm Mbinglo, the traditional chief of the Nso people, the official said.

Local people are negotiating for their release, the source said.

"The cardinal and his driver were released a short time ago. It's a relief, but it is also terrible to know that a 90-year-old cardinal was taken hostage," Kleda told AFP.

More than 3,000 people have been killed and more than 700,000 have fled their homes since October 2017, when militants declared independence in two western regions where English speakers are a majority. The declaration has not been recognised internationally.

The separatists frequently carry out kidnappings, often for ransom, although there have also been killings of abducted security personnel, teachers and civilians accused of collaborating with the authorities.

On Tuesday, separatists kidnapped 11 teachers in a raid on a Presbyterian school in Kumbo but freed them two days later after local people went to their camp and called for their release, according to Samuel Fonki, head of the Presbyterian Church of Cameroon.

The following day, six students in Fundong in the Northwest Region were taken but were released several hours later.

On October 24, seven children were killed in a school in the Southwest Region, which the government has blamed on militants.

Tumi has previously the past criticised the separatists for preventing children from going to school, which the militants deem to be a symbol of the state.

In September 2019, he said "intolerant" militants were "sacrificing the future" of children by denying them an education.

In November 2019, the UN children's agency Unicef estimated that 855,000 children were without schooling in the two anglophone regions.

Anglophones in Cameroon have nursed decades-long resentment at perceived discrimination at the hands of the francophone majority.

Demands by moderates for reform and greater autonomy were rejected by the central government, fuelling momentum for the declaration of independence in 2017.