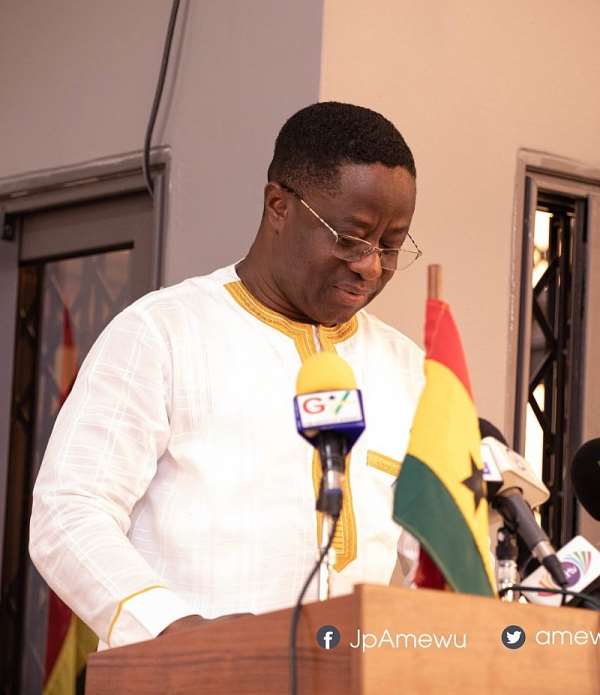 He said the failure has led to the signing of many non-performing power purchase agreements, which crippled the country's energy sector.

Speaking at the government's nation builder's update today, Thursday, 5 November 2020, Mr Amewu revealed that the Nana Akufo-Addo-led government has revived the sector by keeping the lights on without adding or signing a single power purchase agreement.

This, Mr Amewu said, demonstrates the ability of the current government to ensure constant supply of energy to homes and industries despite the “historic” reduction in electricity tariffs.

Mr Amewu said: “The Mahama-led administration signed so many contracts such that we’re now using less than 40 per cent of the contractual take-or-pay agreement”.

“Currently, the demand growth for Ghana is about 200 megawatts on annual basis because we are adding more equipment, we are adding more appliances, we are extending electricity to other places; there’s always growth in demand everywhere there’s power and this is normal in the energy sector…”

“We knew very well what happened in the last four years before we assumed office, so, the various chief executives were brought together with their expertise to help solve the problem”, he said.

“We ensured availability of fuel for power generation, [made] regular payments of outstanding bills to IPPs, implemented the energy sector recovery programme to restore the sector’s financial health and eradicated accumulation of debt”.

He also added: “We have completed the reverse flow of gas, we have relocated the Karpower from Tema to Takoradi; and all these, we have not signed one power purchase agreement.”

To Mr Amewu, signing of power purchase agreements is the easiest job any agency or ministry could undertake in an energy system planning.

He indicated: “To plan and make sure the lights are on goes beyond the signing of PPAs”.

He explained: “If our peak demand is 2,800 megawatts or 2,900 megawatts today, as I speak, our peak demand, our generators that are available are in excess of 5,000 megawatts. The time that dumsor was at its peak, generators that were available were more than 2,900 megawatts, if you combined them, so, the problem was not adding generation but the problem was just bringing the various agency heads together to decide on how to address the problem and that is why today, with the involvement of all agencies, we’ve been able to address this problem.”

Mr Amewu further noted that splitting the energy ministry under the Mahama administration was a problem for the sector.

“One problem was the ministry was split into two. The power sector was doing its own thing and the petroleum sector was doing its own thing. But power has to do with petroleum and power, so, the two need to come together to decide on a common platform on how to address this. This clearly was missing under John Dramani’s [government]. Because of the separation of the ministry at that time, there were no thorough collaboration…”, he noted.