Takoradi Kidnapper: I Started Dating Udeotuk Wills After He Invited Me To Church – Girlfriend Reveals 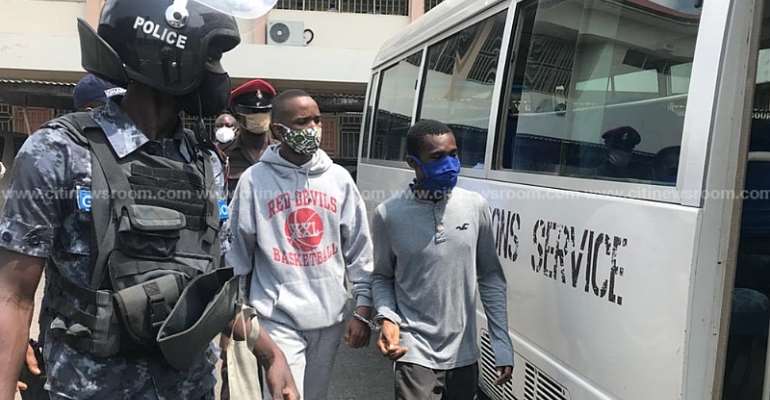 Emily Alimo, the girlfriend of Samuel Udeotuk Wills, the first accused in the Takoradi kidnapping and murder of girls’ case has made some revealing statements before the Sekondi High Court today, November 5, 2020.

Udoetuk Wills, a Nigerian and his fellow countryman, John Orji, have been charged with conspiracy for murder and murder of the Takoradi kidnapped girls.

Madam Alimo told the court that she became Wills' girlfriend after he invited her to church.

While admitting her statement she initially gave to the police before the Sekondi High Court, presided over by His Lordship Justice Richard Adjei Frimpong, Alimo told the court she stayed with Wills for two years.

Thus, between 2017 and 2018, Alimo lived with Wills in Ntankoful in Takoradi and later in Koforidua.

During that period, the second accused, John Orji visited Wills and Alimo. Orji reportedly borrowed GH¢480.00 from Alimo during the period which he never paid.

About 31 witnesses are currently appearing before the Sekondi High Court sitting on the murder charge against the two accused persons for cross-examination by defense counsels.

The following is the account by Samuel Udeotuk Wills' Ghanaian girlfriend, Emily Alimo, to the Sekondi High Court when she appeared.

My name is Emily Alimo, and I am currently resident at Atechem Koforidua. I formerly lived at Kansawrodo near Takoradi for six (6) years before relocating to Koforidua. I know the 1st accused Samuel Wills and he is my boyfriend. I first met Samuel Odoetuk Wills at Ntankoful in the Year 2017, and he invited me to church and I attended church with him on that Sunday at Ntankoful. The next day he (Samuel Wills called me with his number 0577 66 79518 to meet him and show him my house which I did. And we spent time together at my house where he told me he was searching for a job, so I should assist him.

The following week, Samuel Wills came to my house and told me one of his uncle's friends offered to give him a construction work in Nkroful but his family was leaving for Nigeria so he wanted to stay with me and I agreed.

In October 2017, the 2nd accused John Orji came to meet 1st accused, Samuel Wills and Samuel Wills introduced John Orji to me as his friend. The two of them (accused persons) stayed in my house.

Four days after John Orji's stay in my house, they both left for Accra but Samuel Wills came back the same day whilst John Orji returned the next day.

Two days later, John Orji left for Tamale and before leaving, he took GH¢80.00 from me for transport. When John Orji reached Tamale, he called Samuel Wills and told him that the friend he went to visit was not around, so he needed some money for his upkeep. So I gave Samuel Wills GH¢400.00 to give to Orji.

John Orji promised to bring the money when he returned but I never saw him again. In January 2018, I travelled to Koforidua to take care of my sister and her baby. I stayed in Koforidua up to March/April ending to prepare for a tomatoes business in May 2018.

After the tomatoes business, I came back to Takoradi in June 2018 but on July 3rd my sister asked me to come back to take care of her baby, so she could attend a midwifery meeting on the 9th July 2018. I went on 6th July 2018″.

Samuel Odoetuk Wills came to Koforidua in the last week of August 2018 to make enquiries about educational institutions as according to him his mum wanted him to continue his education.

Wills introduces a new friend to his girlfriend

When Samuel Wills came, we met at the lorry station where he told me his friend John Orji had been in Takoradi. While at the station, he invited one man he introduced to me as his friend whose name was Iceman. Samuel Wills left with his friend, Iceman.

In the same month of August 2018, I received a telephone call from a stranger who said the owner of Tigo number 057 667 9518 (Samuel Wills) had kidnapped his sister and that the said person used the same number to call me, so I should meet him.

I was scared, so I confronted Samuel Wills and informed him to release the girl if he was the one keeping her but he denied any knowledge of kidnapping a girl.

Samuel Wills later told me he had discussed the issue with his mother who advised him to go to Takoradi for a lawyer.

In October 2018, one of my friends called from Takoradi to inform me the trap door to my room had been left open but when I called Samuel Wills, he told me he was in Accra.

I left Koforidua to Takoradi the next day to check on my room but when I got there I met Samuel Wills, and he claimed he was just returning from Accra.

When he opened the door, my mattress was not in the room and when I asked him about the mattress he told me he knew nothing about its disappearance.

I slept with Samuel Wills in the same room and I left the following morning.

Wills gets a job?

After I had left in October, Samuel Wills called to tell me he had got a job at Nkroful and when I called a friend to find out if she had been seeing Samuel Wills around, she responded in the negative.

In the first week of December 2018. I came to Takoradi on a surprise visit but I did not meet Samuel Wills in the house. So I called him to bring the keys, so I could enter the room, but he came without the keys and rather told me the keys were with a boy called Manf.

When I asked him to call the boy he refused and started fighting with me.

I left the house to sleep in a hotel, but he followed me and told me the boy had gone to the market circle.

Samuel Wills told me that John Orji came there (Takoradi) in November 2018. I slept in the hotel with Samuel Wills and left to Koforidua the next morning.

Somewhere along the line, I realized that Samuel Wills had stopped using the Tigo number 057667 9518 and when I questioned him about why he was using the different mobile number: 055 0905 425, he claimed his SIM card got missing.

On December 21st 2018, the police arrested me. I led them to Samuel Wills at the back of our house. I spent three days in the police cells and was discharged on 24th December 2018.

Samuel Wills was also living at Kansawrodo with some family members.

We were living together before I left for Koforidua.

My boyfriend Samuel's Facebook name is Samuel Wills and the DP (Display picture on his page) is a boot.

I have no information with respect to the girls my boyfriend Samuel Wills had allegedly kidnapped.

The police say two lines belonging to Samuel Wills had contacted the kidnapped victims and I believed it. This is because both lines 057667 9518 and 0550905425 belonged to Samuel Wills.

Samuel Wills should tell the police where the kidnapped girls are or what has happened to them.