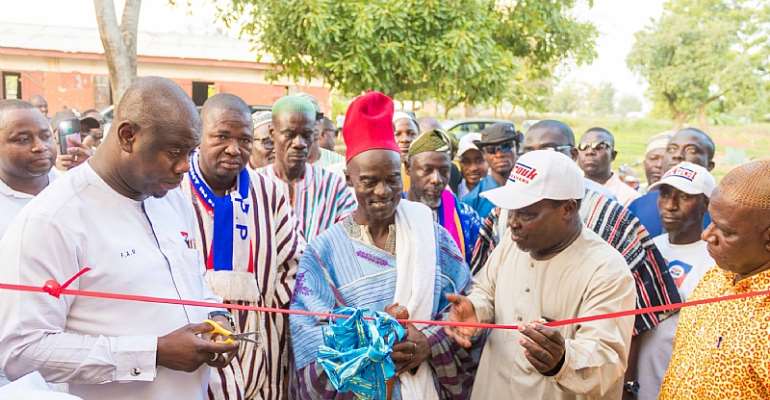 The move by Mr Mahama forms party of his New Yendi City (NYC) agenda of improving the socio-economic lives of the people of the area who are predominantly farmers and traders.

Speaking at the commissioning ceremony on Tuesday, 3rd November 2020, Alhaji Farouk Mahama noted the facility was constructed after a need assessment was conducted.

He said the new market will bring together businesses from different communities and districts to trade in a more conducive atmosphere and maximize profit.

The son of the late former Vice President of Ghana also assured King of Dagbon, Yaa-Naa Abukari II and the people of Yendi he will continue to serve them well with humility.

“My commitment to serving the people of Yendi is unquestionable and I want to reaffirm that commitment before you here. I am going to serve in humility and help in my way address the challenges confronting the area”, he assured before the King and people of Yendi.

The Chief and people of Adibo thanked Mr Mahama for putting the multi purpose market center for the community.

They prayed he (Farouk Mahama) wins the December polls and to continue with his good works.

However, National Organizeer of the NPP Sammy Awuku joined Mr Farouk Mahama and Northern Regional Chairman Mohamed Bantima Samba for a tour of the Yendi constituency.

Addressing at a mini rally, Mr Awuku urged electorates to consider the good works of President Akufo-Addo and parliamentary candidate for the area, and give Nana Addo another four year and vote massively for Farouk Aliu Mahama as Member of Parliament.

He assured the NPP government will continue to bring more development to the people of Dagbon.