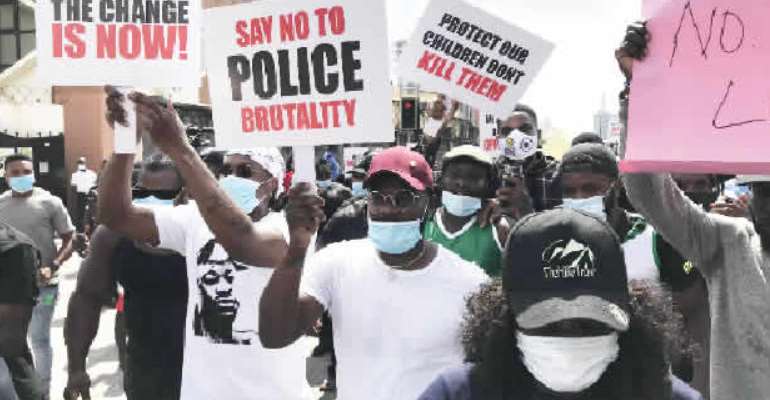 The police force in any given jurisdiction is basically instituted to keep the peace of a community; that is to protect lives and properties of its citizens, but where they are deployed for any other reason (s) either than what is stated, to the extent of working unprofessionally, it becomes a great source of concern.

It is by no chance that the people of Nigeria(ns) raised concerns about the work of a critical state institution like the police. Weeks of protests in the Federal State of Nigeria by citizens to get their government to disband the supposedly notorious police unit, the Special Anti-Robbery Squad (SARS) has rather ended up with several acts of human rights violations and this is very unacceptable to the ‘Human Rights at Law forum’.

Protestors have met the full anger and brutality of the police force of the Federal Republic of Nigeria, causing several injuries and deaths, which we believe is inappropriate and must be outrightly condemned since there is no justification whatsoever for such brutalities to occur.

In as much as we recognize that some negligible number of protested may have gone overboard in their quest to demand justice, the police force unduly and unjustifiably met them with unproportionate and nonsensical response resulting in fatalities.

We thus unequivocally call on the Nigerian government to immediately cause their police force to seize any hostility towards its citizens and hastily take steps to diffuse the unseemly tension that may exist in the country. We equally call on the government to as a matter of urgency set up an independent commission of inquiry to investigate alleged atrocities and deaths that occurred under the watch of SARS and also during the current citizens’ protest so as to bring to book any one complacent in the various acts of rights abuse.

As the government has come out to assert that steps have been taken to disband the SARS unit, verifiable and satisfying details must be provided to all stakeholders including protestors, with the government giving the assurance that such a ‘human terrorizing unit’ shall not be established in future.

We also which to state that the government should hold on to the idea of reintegrating members of the SARS unit into the other police units until due diligence is done; that is, providing appropriate reorientation for non-complacent actors of the units, and basically eliminating criminal-minded personalities from the ‘disbanded’ unit.

We also call on the international community, particularly the sub-regional body (ECOWAS) to exert pressure on the Nigerian government to respect international human rights laws and conventions which they have duly sing onto, and monitors them on the way to bringing perpetrators of human rights abuse to account.

Human Rights at Law Forum looks forward to the establishment of normalcy in the beautiful country of Nigeria as soon as possible.