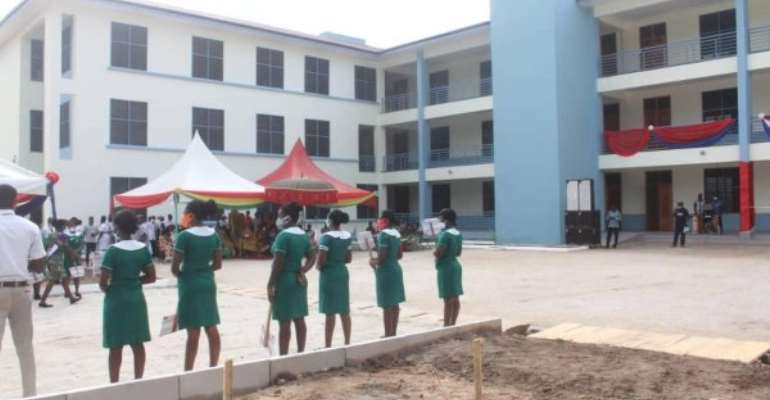 Vice President, Dr Mahamudu Bawumia has commissioned a two-storey lecture hall at Bibiani College of Health and Allied Science satellite campus at Sefwi Anhwiaso in Bibiani-Anhwiaso-Bekwai Municipality to provide a conducive environment for teaching and learning.

Dr Bawumia also cut the sod for the construction of a hostel to improve the accommodation situation of the college.

The Vice President, who is on a two-day tour of the Western North Region, attended a durbar of Chiefs and people of Sefwi Chirano and interacted with the constituents.

Dr Bawumia highlighted the many policies and programmes rolled out by the Akufo-Addo government in the past three years, which included the School Feeding Programme, One District One Factory, restoration of the teacher trainees and nurses allowances.

The others are cocoa pollination, scholarship package for tertiary students, provision of an Ambulance per each district, free water supply and electricity and free senior school policy which had brought employment and relief to parents.

He said the Akufo-Addo administration inherited a bad economy from the previous government but managed to transform it and to improve the living conditions of Ghanaians.

He said the Free Senior High School policy had reduced the financial burden of parents in sending their children to SHS.

This, he said, was a clear indication that NPP had fulfilled many of its campaign promises and urged Ghanaians to give the government another four years.

He said more than 90,000 health workers were employed in the health sector within one and a half years while others had government scholarship to study abroad to improve their working skills.

Dr Bawumia urged the people of Bibiani Constituency to vote for Nana Akufo-Addo and the Parliamentary Candidate for Bibiani-Anhwiaso-Bekwai Constituency, Mr Alfred Obeng Boateng to enable them to complete the development projects ongoing in the Constituency.

He said the NDC government would collapse the Free Senior High School policy if Ghanaians mistakenly gave them another opportunity.

In his remarks, Ogyeahoho Yaw Gyebi ll, the Paramount Chief of Sefwi Anhwiaso Traditional Area, commended President Akufo-Addo for his unprecedented achievement within three and a half years in government.

Touching on the development of Bibiani Municipality, Ogyeahoho thanked President Akufo-Addo on his appointment to serve as the member of GNPC Foundation and the elevation of Bibiani District to Municipal status.

Ogyeahoho, who is also the President of the Western North Regional House of Chiefs,

pledged support for Nana Addo Dankwa Akufo-Addo come December 7 to retain the NPP government in power to continue with the good works.