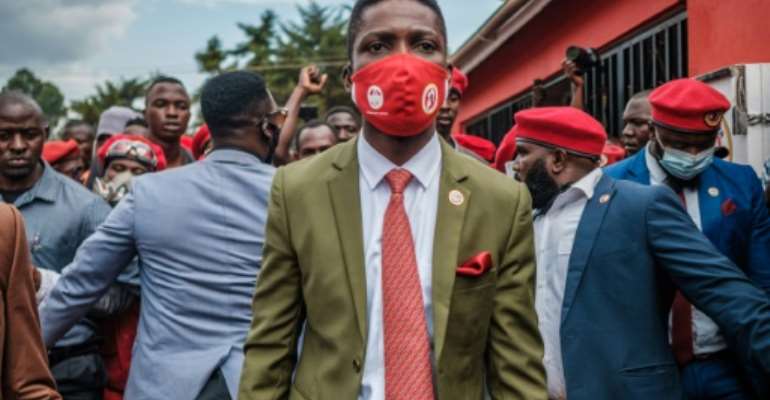 Wine, a 38-year-old opposition MP whose real name is Robert Kyagulanyi, was forcefully pulled from his car and thrown into a van in Kampala after submitting his candidacy papers to election officials, his National Unity Party said.

"Security forces broke into Hon. Kyagulanyi's car to arrest him shortly after his nomination," his party wrote on Twitter.

Wine is seeking to unseat Museveni, one of Africa's longest-serving rulers, who filed his candidacy Monday as the flag bearer for the National Resistance Movement party.

The 76-year-old is the only president most Ugandans have known, and had the constitution amended for a second time to allow him to run a sixth time in 2021.

Police refused to comment on the violence surrounding Wine's nomination or confirm he had been arrested.

"He is at his home in Magere, Kasangati," said Patrick Onyango, deputy spokesman for Kampala police, referring to a suburb in the Ugandan capital.

But he said Wine had breached rules laid down by the election body by rallying his supporters to his nomination: "Any action taken by the police in that regard was justified," Onyango said.

After his nomination, Wine said his campaign to defeat Museveni had entered "the most critical phase".

Another opposition contender, Patrick Oboi Amuriat, arrived shoeless and dishevelled to file his candidacy after being intercepted en route to party headquarters and bundled into a police van.

"It is disgusting, disappointing, but this was expected by a regime that is shameless, desperate to cling to power," Amuriat told AFP after being marched by police across the university grounds in his socks.

He said the headquarters of his party, the Forum for Democratic Change, was surrounded by police and military ahead of his nomination.

The US embassy in Kampala had issued a security alert warning of "elevated potential for civil disturbances" near the university on Tuesday, and advised Americans to steer clear.

Wine, nicknamed the "Ghetto President", has cultivated a popular youth following and has faced escalating police harassment since announcing his intention to challenge Museveni, who seized power at the head of a rebel army in 1986.

His concerts are routinely banned and public rallies broken up with teargas, and Wine himself is frequently detained.

Observers have said the opposition is weaker divided and unless a united front challenges Museveni he could be difficult to unseat.