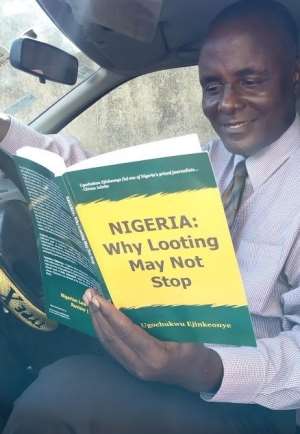 I have said it so several times that when Nigerian politicians converge to map out plans for acquiring power, which, in most cases, practically translates to securing unlimited access to unearned wealth, they do not usually remember that they came from different ethnic blocks. At such gatherings, they will all think alike, talk with one voice and even look and laugh alike. They will speak the same language.

Indeed, illicit accumulation and all forms of corrupt activities do not have tribal marks. The colour of graft is the same any day, no matter who is involved.

At such times, the masses are hardly remembered. They do not matter at all. Everybody is preoccupied with the much he or she would be able to accumulate and cart away for his personal luxury and that of his family and cronies.

In the introduction to my book, "Nigeria: Why Looting May Not Stop,” I maintained that corruption became very monstrous in Nigeria “when public office gradually ceased to be a platform for rendering selfless service and transformed into the easiest route to criminal accumulation of wealth. And the law, too, became increasingly very weak in the face of the overwhelming sleaze. Since then, generations of public officers have passed through this route, looting the country blind with utmost impunity and quitting office into incredible abundance, without any fear of anyone ever prying into the clearly unearned wealth they flaunt with revolting fanfare…”

And because of this unhealthy development, “…an ever-swelling cult of looters has emerged whose nuisance value has remained the undisputed headache of the country… And given this very depressing situation and with the dreadful cult of looters growing in stature and influence, maintaining effective command at virtually all our public institutions, how then can we possibly hope to be able to sanitise the system or have free and fair elections in this country?”

Sadly, the problem has, in the course of time, been so horribly complicated. This is because, “the members of this cult have so much money to throw around and so have easily enthroned themselves as formidable godfathers and kingmakers who deploy the billions at their disposal to install and remove governments at will. Many of them can single-handedly found and fund political parties without the slightest impact on their bottomless pockets. They also have all it takes to frustrate any attempt to pry into their hideous pasts. The very negligible few among them who manage to get ‘messed-up’ in the ‘anti-corruption war’ are those foolish enough to find the trouble of those more powerful than them, or get themselves into some really complicated situation that it would be difficult to extricate them without a serious backlash capable of posing a dangerous threat to the peace and stability of the entire cult. So, they are carefully sacrificed to preserve the whole house and used in the process, too, to launder a dubious commitment to an ‘anti-graft’ campaign.” (pp.vii-x)

Now available on AMAZON.COM
That is the egregious story of Nigeria. Many of the politicians out there raising a lot of din about their patriotism and selfless-service may just be ordinary job seekers looking for meal tickets. And that is why I insist that Nigerian masses are so tragically naïve.

Immediately these politicians disagree among themselves, either on the power or money sharing formula, they would suddenly remember their differences which never mattered at all when they were sharing and carting away happily. Then they would return to the masses whom they had long forgotten to stoke ethnic tensions among them in order to use them to negotiate for themselves positions of power, influence and wealth.

Consequently, the suffering man who had lived peacefully with his equally suffering neighbour would be persuaded to suddenly see themselves as enemies and start fighting each other. The people would be deceived into thinking they are fighting to advance the interests of their ethnic groups, not knowing that they are at war to help negotiate better places and limitless luxuries for selfish and callous politicians.

Sometime ago, I was in one of the state capitals and what were on virtually everybody’s lips at that period were the media reports about some choice structures and juicy investments allegedly belonging to a former governor which were believed to have been acquired with the proceeds of his mindless looting. Opinions were divided on the mind-blowing report. Although some people rose in stout defense of the fellow, what I found unbelievable was that some others were ready to even go to the sickening extent of openly boasting that what the man was alleged to have stolen was “their” money, so, why should it be the business of anyone who was not from the state!

One evening, I went to a nearby kiosk to make a purchase, and there, I saw two young men who, judging by their haggard appearance, should belong to the lowest wrung of the country’s social and economic setting – the worst victims of the programme of impoverishment that successive corrupt politicians have unleashed on this country.

As one of the young men expressed outrage at such mindless stealing by the former governor, the other one barked at him: “go back to your state and talk about the stealing taking place there and leave our state alone. It is our money that was stolen and it does not concern you! Just shut your mouth, we are okay with that!”

It was difficult to comprehend what I had just heard, but the fellow was dead serious repeating the same words to the other young man, becoming angrier as he spoke and showing clearly that he could initiate a physical combat if the other fellow continued to discuss the matter that “did not concern” him.

With people who reason like this fellow abundantly existing across our country, why should any thieving public officer ever think of exercising any restraint?

That is why the ethnic conflicts in most cities are periodic. Some say they only occur during elections or when some politicians have either lost out in their quest for power or are being tried for corruption.

The most painful thing is that while the hungry and haggard masses are out there fighting each other, the politicians whom they wrongly assume is their champion is behind closed doors negotiating a better deal for himself. Once he has been settled satisfactorily, he would come out and tell his people to halt the hostilities. He may let a few crumbs fall to them, that is, those who did not die during the conflicts.

And the deep bitterness which he had caused between good neighbours and amazing friends in the course of the self-serving conflict he initiated might take time to heal, if it will ever. He would move away to wallow in his usual luxuries until the need arises again for him to stoke another ethnic tension to service his narrow, selfish interests.

I have been calling on Nigerians to stop listening to these politicians, but will they ever hear?

There may be some people breathing today who will agree to serve as thugs in future elections, and may lose their lives in the process. They may champion the next ethnic or religious conflict when some unscrupulous politicians return to use them once more to further their selfish purposes. They may even be killed or maimed in the process, who cares? Certainly, not the callous and greedy politicians that instigated them!

Please, Nigerians, stop allowing yourselves to be used as cheap tools in the hands of these selfish and heartless politicians.

The only divisions that ought to exist in Nigeria should be between the oppressors and the oppressed, the exploiters and the exploited, and criminally enriched and the wickedly impoverished.

Nigerians, stop fighting each other to impress your oppressors. You are all victims!

*Ugochukwu Ejinkeonye is the author of the book, Nigeria: Why Looting May Not Stop. It is available on AMAZON.COM