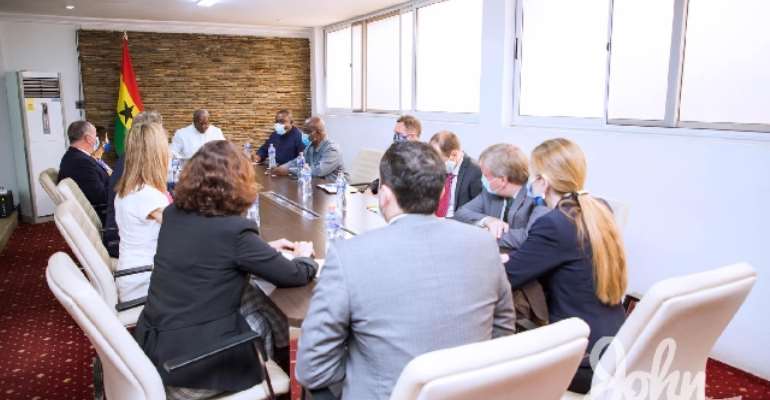 Former President John Mahama has complained to a delegation of EU Ambassadors that “a lot of things have gone wrong” with Ghana’s electoral processes.

Mr Mahama told the EU Ambassadors he hosted on Monday, November 2 in Accra that the Electoral Commission (EC) and the Akufo-Addo government, have acted and are acting in various ways that put the transparency, freeness and fairness of the upcoming polls in danger.

“In our country, we have a problem with the Electoral Commission”, Mr Mahama reported to the EU Ambassadors, explaining: “There have been incidents leading up to the elections that create a certain anxiety about whether the election is going to be transparent, free and fair and whether it’s going to be devoid of any chaos or disorder and we want you to take note of it”.

The former president continued: “In other cases, they’ve even introduced new things into the electoral process too late and too close to an election and you need to suffer the results of that”.

According to him, those late interventions have had serious adverse consequences on the whole process.

“A late registration of voters has led to late exhibition [of the register], omission of names, it gives us very little time to correct before we go into the elections and I’ll just give an example: they announced that they’ve taken 30,000 names out of the register after going through the register, they haven’t published the names and, so, we don’t know whose names have been taken off, people are going to get there on election day and they say: ‘Your name is not in the register’ and there might be a genuine reason why they should be on the register”, he cited.

He added: “We’ve not been told who those people are, why their names have been taken out”.

“And it’s even after we filed that they said 30,000 names have been taken out and, so, if a voter, who believes he was registered, signed my presidential nomination form and you’ve now taken his name out, it means that my form … so, a lot of things have gone wrong in terms of the processes but also in terms of the violence associated with the processes.

“You remember the by-election we had last year which led to quite serious harm to many individuals.

“The pronouncements of government officials that that by-election violence was a dress rehearsal and that the real thing is going to happen on 7 December; a Commission of Enquiry was set up, identified the perpetrators of that violence, government rejected most of the commission’s report, refused to act, the same characters who were involved in that violence are today walking around, still carrying the same weapons that they used to cause that violence.

“It manifested again during the registration period, people lost their lives, gunshot wounds, stabbing, about three people were killed during the registration, deployment of the military in some parts of the country to intimidate voters from coming to register; a lot has been going wrong that we feel a bit anxious about”, he added.