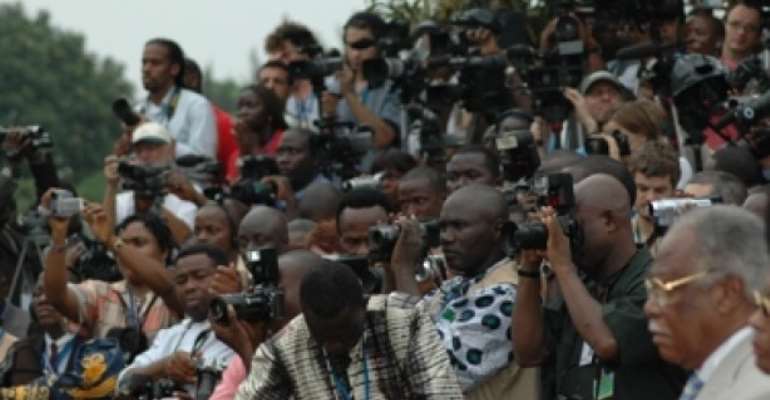 IF you read the obituary of Sir Harold Evans, who attained great fame as the Editor of the London Sunday Times and died on 23 September 2020, at the age of 92, you will find an answer to the question.

Harold Evans was the journalist par excellence. He'd always wanted to be a journalist, and so, when he left school at the young age of 16, he enrolled in a shorthand class where all the other students were girls! Ever a lad with a strong mind, he completed the course, undeterred by the teasing of friend and foe alike. So when he became a reporter, he had the tools to attain total accuracy. And he thereby developed a respect for FACTS that never left him.

His first job was on a tiny newspaper, (appropriately called the Reporter!) published at Ashton-under-Lyne. Among his assignments on the paper was being sent to cover a visit by General George Carpenter of the Salvation Army.

“When the great man asked the assembled Salvationists whether they had been 'saved', I explained that I was from the press,” Evans recalled later. “But you can still be saved!” said the Salvation Army general.

Evans did not reveal what he would have done, in his days as a great editor, with a story about a Bible-puncher. But he unashamedly became a “missionary” of sorts, himself, when he was appointed, in later life, to edit some of the greatest newspapers in the world – The London Sunday Times (a weekly) and the London Times (a daily).

The journalistic career of Harold Evans followed service in the British Air Force, during the 2nd World War,. He acquired from the Air Force, that insouciance, in the face of challenging situations, which is drilled into all personnel of the Air Force. Topping that with a University course at the end of the War, ensured that he should acquire the self-confidence necessary to battle against governments, wealthy corporate bodies, callous, intransigent local authorities, and, of course, mocking or undermining fellow journalists jealous of his immense social stature.

The most celebrated campaign Harold Evans conducted on The Sunday Times was one that sought to obtain compensation for the families of children born with deformed limbs, resulting from their mothers having taken a drug called “Thalidomide” that was prescribed to pregnant women in the UK, to cure them of “morning sickness”.

The incredibly unsafe drug was distributed by very wealthy pharmaceutical firms, which callously refused to accept responsibility for the negligence that had led to the children's deformities. When Harold Evans committed The Sunday Times – alone amongst the British media – to fighting the drug firms on behalf of the distressed families, he met with very expensive lawsuits that were instituted against his paper for libel.

All the subtle processes in British libel law that favour the rich and powerful against the poor – such as injunctions silencing the media that can only be broken at the risk of contempt of court proceedings; adjournments that increased the expense of litigation; intimidation and sometimes, the purchase of “expert” witnesses – were deployed against him. Both his reputation and his career came under threat because the forces he fought against were so powerful. And, indeed, had it been left to the British judiciary alone, he would have fallen flat on his face. For Evans fought the companies all the way to the House of Lords – and lost! He could not believe that British judges, out of a respect for legal technicalities, could cynically shut their eyes to the obvious plight of hundreds of children who had been born, and would go through life without limbs, just because powerful drug companies had been negligent, in search of huge profits.

The cases against The Sunday Times lasted for about a decade. But Evans continued the fight. When the British courts ruled against him, he took the unusual step – for a newspaper that respected British traditions – of appealing to the European Court of Human Rights in Strasbourg. Was The Sunday Times,in doing that, not impugning the integrity of the vastly self-important British judicial system?

Well, this is what he wrote about what happened at Strasbourg:

“It was one of the most memorable days of my life when … I sat in Strasbourg on April 26, 1979, and listened to the conclusion of ‘L’affaire Sunday Times’,” (Evans wrote). “Twenty judges of the European Court had deliberated. … Nine of them were against us, including the British judge, but eleven carried the court [and said]: ‘We find there has been a violation of Article 10 [of the European Convention of Human Rights].’

“This meant the [British] House of Lords injunction had infringed our rights to free speech and that the law of contempt would have to be liberalised in Britain in the spirit of the Convention”, Evans wrote.

An obituary in the London Guardiannoted that following this momentous victory, “Evans’s reputation was at its height. For a decade, he and the team of talented and aggressive journalists he led at the Sunday Times,pulled off one triumph after another.”

There was, among these scoops, the revelation of Kim Philby as the highest-placed Soviet spy in the history of British intelligence; the showing-up, as a fraudster, of the British MP and publisher, Robert Maxwell; and the publication, in defiance of Britain's self-serving secrecy laws, of Richard Crossman’s diaries (detailing the daily acrimonious happenings inside the Cabinet of Harold Wilson.)

Harold Evans also added to his fame as a fearless journalist by becoming the first British editor to ignore a “D”-Notice: this was an “alert”, issued by the British Government through the “D-Notice Committee” (on which some servile journalists served) that prevented the media from following certain stories, because they were, allegedly, related to “national security”.

In fact, what such alerts imposed was a form of self-censorship which hobbled the media when they were on to stories – such as the defection of British intelligence agents to the Soviets – that would embarrass British intelligence when published. How could a Western nation that consistently criticised the Russians for imposing censorship on their media, impose censorship on its own media and be made to get away with it on a mendacious recourse to reasons of “national security”, Evans implied, by ignoring the D-Notice.

Evans also cut new ground in British journalism by setting up a well-resourced “Insight” team, made up of very courageous journalists selected from the best of the paper's news staff, whose job was to spend time, at a more leisurely pace than usual, digging into stories of skulduggery, not only in British public and business life4, but throughout the world.

I had the honour of being commissioned to do two stories for the Insightteam of The Sunday Times – one dealing with a Liberian-registered Portuguese oil tanker whose captain sold the cargo of crude oil the boat was carrying, and then deliberately scuppered the boat in West African waters!

I managed to get to Liberia and persuade the lawyer appointed to defend the Portuguese captain, to let the cat out of the bag and tell me the whole story. I think the highest compliment ever paid to me in my journalistic career was the note sent to me by the Insightteam editor, who described my story on the caper as “excellent”! That meant they had thoroughly checked the facts I had produced and were certain that if the paper were sued for libel for printing them, they would win because “truth is a complete defence in libel”!

Such incidents made me enjoy working for The Sunday Times very much. I also covered another good story for the paper from Liberia – the violent and bloody Samuel Doe military coup of 1981. The paper's magazine section also sent me on a one-month tour of Nigeria, reporting on the entire economy of the country and its likely political future.

But another story The Sunday Times sent me to do in Lome, nearly cost me my life. I was asked to investigate the crashing-landing, at Lome airport, of an aircraft that was carryinga secret cache of arms and – a large amount of currency! The Togolese authorities had hushed the matter up – because hey were involved in an illiterate arms trade, or because they had taken a huge bribe from the arms traders!

So it was perhaps the most dangerous story I ever covered. For next thing I knew, the Togolese, alerted by some of the people I had interviewed that I knew “too much”, had stationed agents at the Aflao border to arrest me and charge me with espionage (!) when I was leaving Togo! Fortunately, I got wind of their intentions and managed to get back to Accra – by other means!

It was lovely working for a paper edited by Harold Evans. Certainly, the courage and intellectual honesty of Harold Evans he c0nsistently exhibited, would be difficult to find in any other editors of the 20th century – and that includes the Washington Posteditors who brought an end to Nixon's presidency.

The hapless people Harold Evans championed included Timothy Evans, a man convicted and hanged in England in 1950, for a murder he did not commit. After Harold Evans and the Sunday Times took up what they considered was his wrongful conviction, Timothy Evans was granted a posthumous pardon. His case was one of the factors that persuaded the British Parliament to abolish the death penalty in the UK!

No wonder Harold Evans was given a knighthood by the Queen. To him, though, the greatest honour he received must have been the vote for him, by readers of the UK Press Gazette, according him the accolade: “The Greatest Editor That Ever Was.