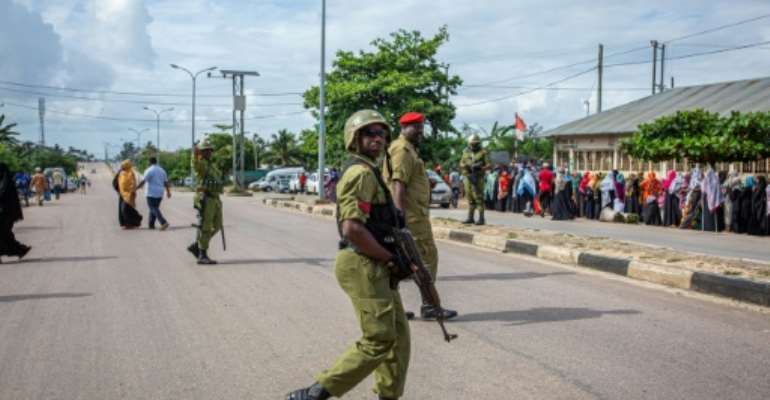 Tanzanian President John Magufuli's landslide re-election has been dismissed as a sham by the opposition and diplomats who say democracy has been dealt a crushing blow in one of Africa's most stable nations.

Magufuli's win with 84 percent of votes was the largest margin of victory in a presidential race since the first multi-party vote in 1995, and the opposition has alleged massive fraud.

Even before the October 28 vote, few believed it would be free and fair, after Tanzania's steady decline into autocracy in his first term, with arrests and attacks against the opposition, a ban on political rallies and squeezing of press freedom.

But even seasoned observers have been stunned by what they see as a brazen effort to completely rid the country of any opposition.

"No election anywhere in the world is perfect but this was just so blatant. They (ruling party) didn't care. They decided to take all power and they did it in a way that was obvious," a western diplomat told AFP on condition of anonymity.

Aside from a landslide win in the presidential race, the ruling Chama Cha Mapinduzi (CCM) party took 97 percent of the 264 seats in parliament, with the most popular opposition MPs losing their seats.

"I expected the opposition would take nearly half of the parliamentary seats this time round but what happened is actually strange. We are almost going back to a one-party system," said Professor Gaudence Mpangala of the Ruaha Catholic University in southern Tanzania.

A fruit vendor in Dar es Salaam, speaking on condition of anonymity, said he believed there was "an agenda" behind the massive victory.

"I guess Magufuli will change the constitution to continue staying in power and the easiest way is to have all lawmakers from his party."

Fraud in front of diplomats

In the runup to the vote, opposition gatherings were teargassed, and opposition Chadema presidential candidate Tundu Lissu -- who garnered only 13 percent of votes -- was banned from the campaign trail for seven days for "seditious language".

Most foreign media were barred from the country, and there were no major local or international observer missions allowed.

However the western diplomat said that even small "symbolic" observer teams sent out from embassies had witnessed "ballot stuffing, prevention of party polling agents from getting into poll stations and repeat voting by security officials."

Bulk text messaging, WhatsApp and Twitter have meanwhile been blocked for almost a week.

The opposition called for mass protests on Monday, prompting a heavy security presence, and the rapid arrests of several top leaders, including the brief detention of Lissu.

"If they think most people support the winners, why should they use police to suppress and threaten people who planned peaceful protest?" said Ahmed Issa, a resident of Buguruni in Dar es Salaam.

A ruling party supporter in Buguruni, Mashauri Gasper, said he was happy with the result and described the opposition as "divided and disorganised."

The ruling party could not be reached to comment on the accusations made by the opposition and observers.

In a region plagued by leaders ignoring their two-term constitutional limits, and ethnic and political violence, Tanzania has been a peaceful outlier, with a booming economy averaging six percent growth pre-Covid-19, and one of Africa's top tourist destinations.

However things shifted under authoritarian Magufuli. In 2018, he vowed that the CCM -- which has ruled since independence in 1961 -- will be "in power forever, for eternity".

Murithi Mutiga, an analyst from the International Crisis Group (ICG) think tank, said that while the CCM was a traditionally dominant party, previously "at least it cared about its image".

A Tanzanian police officer directs a woman at at a polling station in the outskirts of Stone Town, Zanzibar, on October 28, 2020. By MARCO LONGARI (AFP)

"Now what we have seen under Magufuli, and what was by all accounts a sham election, is a real regression to a style of politics that is completely alien to Tanzania, one marked by crude methods of vote manipulation but also a thuggish approach by security service in the way they handled the opposition."

The islands also elect their own president, and opposition ACT-Wazalendo candidate Seif Sharif Hamad was arrested twice during the election and his party spokesman Ismail Jussa mercilessly beaten by security forces.

"Even the most authoritarian countries in the region do care about their image and they allow at least the pretence of a competitive election," said Muthiga.

"In Tanzania they threw that out of the window."