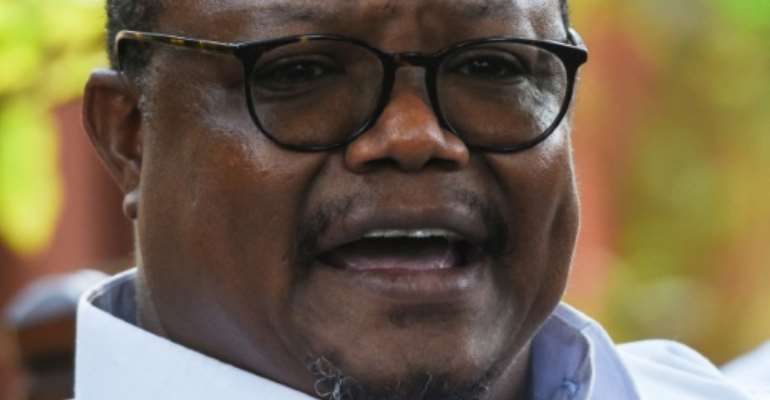 Tundu Lissu garnered only 13 percent of the vote, a result which cannot be contested in court, and said the only option available was "to take this to the people". By STRINGER (AFP)

Tanzanian police on Monday briefly arrested defeated presidential candidate Tundu Lissu after rounding up other top opposition leaders who have called mass protests against an election they say was riddled with fraud.

Lissu garnered only 13 percent of the vote, a result which cannot be contested in court, and said the only option available was "to take this to the people".

The opposition called for mass protests starting on Monday and demanded fresh elections.

However Chadema later wrote on Twitter that the 52-year-old had been "released after being questioned for two hours".

Chadema chairman Freeman Mbowe and six others who were also arrested remain in custody.

"We arrested them in a meeting to organise the protests which we already banned. Some of these people travelled from upcountry to Dar es Salaam and are trying to use youths to take it to the streets," Mambosasa said.

He added that those arrested had "admitted that they were organising criminal activities such as setting petrol stations, markets, vehicles and some government offices on fire."

The arrests, and a heavy security presence, appeared to have deterred potential protesters, and demonstrations never took place.

Observers have expressed alarm over the reports of irregularities during the election, and the subsequent arrests.

Lissu, who returned to Tanzania in July after three years abroad recovering from 16 bullet wounds sustained in an assassination attempt, said his party's agents had been kicked out of polling stations and ballot boxes had been stuffed.

Magufuli was first elected in 2015, and alarm has grown over his slide into autocracy amid a crackdown on the opposition and the media.

In semi-autonomous Zanzibar, which also elects its own president, the opposition's presidential candidate was arrested twice last week and attempts to protest were quickly and brutally crushed by security forces.

"If they think most people support the winners, why should they use police to suppress and threaten people who planned peaceful protest," said Ahmed Issa, a resident of Buguruni area in Dar es Salaam.

Most foreign media were not allowed into the country to cover the election, while local and international observer missions were also not present.

In semi-autonomous Zanzibar, which also elects its own president, attempts to protest were quickly and brutally crushed by security forces. By MARCO LONGARI (AFP/File)

Bulk text messaging, WhatsApp and Twitter remained blocked for the seventh day in a row.

"We are deeply concerned by reports of election irregularities, politically motivated arrests, and violence during Tanzania's elections last week," US Secretary of State Mike Pompeo wrote on Twitter.

US ambassador Donald Wright urged the government to "cease these targeted arrests, release detainees, restore telecommunications, and afford due process under the law to all citizens."

James Duddridge, the United Kingdom's minister for Africa, said in a statement Monday his country was "deeply troubled by the reports of violence and heavy-handed policing in the elections, including the arrest of opposition political leaders."

He called for a "transparent investigation by the electoral authorities into reported irregularities, and for all involved, including the security forces, to act with restraint to ensure the peaceful resolution of tensions".