At least 50,000 take part in latest anti-France rally in Bangladesh 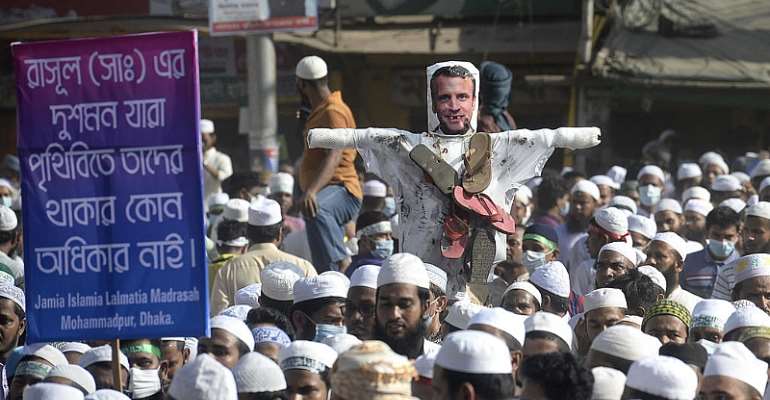 At least 50,000 people have taken part in the biggest demonstration yet in Bangladesh over French President Emmanuel Macron's defence of the right to publish cartoons of the Prophet Mohammed. Protest organisers counted 100,000 participants.

A rally which started at Bangladesh's biggest mosque in the capital, Dhaka, was prevented from getting close to the French embassy where security has been stepped up.

Police estimated some 50,000 people took part in the protest, which demanded a boycott of French products, while organisers said there were more than 100,000.

Protesters chanted "No defamation of the Prophet Mohammed" and burned an effigy of the French leader.

Macron sparked protests across the Muslim world after the murder last month of teacher Samuel Paty -- who had shown his class a cartoon of Mohammed -- by saying France would never renounce its laws permitting caricatures, considered by many Muslims to be blasphemous.

Third anti-France protest in a week

The latest major anti-France demonstration in Bangladesh, the third in seven days, was called by Hefazat-i-Islami, one of the most influential radical Muslim political groups in the country of 160 million people.

Many people came from towns outside Dhaka to take part in the rally.

"I call on traders to throw away French products. I ask the UN to take stern action against France," he told the rally.

The Hefazat-i-Islami organisation has since given the Dhaka government 24 hours to close down the French embassy in the Bangladeshi capital.

President Macron sought to calm flaring tensions with Muslims around the world at the weekend, telling an Arab TV channel he understood that caricatures of the Prophet Mohammed could be shocking, while lashing out at "lies" that the French state was behind them.

France is on edge after the republication in early September of cartoons of the prophet by the Charlie Hebdo weekly, which was followed by an attack outside its former offices, the beheading of a teacher and an attack on a Catholic church in Nice last Thursday that left three dead.