Indian Muslims take to the streets against French President Macron 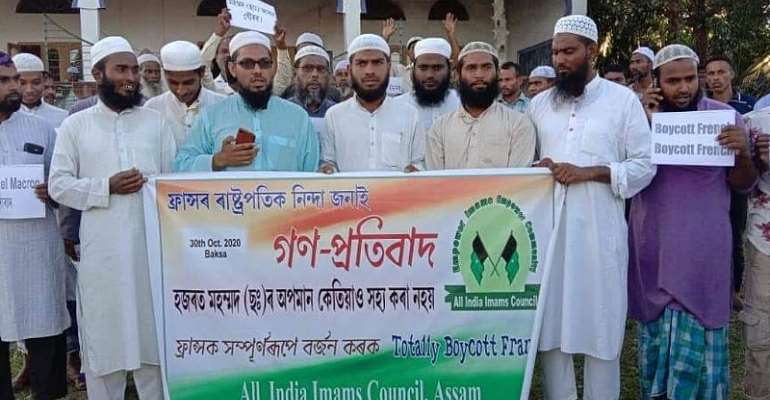 Protests against French President Emmanuel Macron have broken out in various cities across India, expressing anger over the leader's stance justifying caricatures of Prophet Mohammed in the satirical weekly Charlie Hebdo. India has the second largest population of Muslims in the world, behind Indonesia.

In the central Indian state of Madhya Pradesh, Congress legislator Arif Masood led thousands of protesters who raised slogans against Macron while in the western state of Gujarat, posters carrying Macron's photograph with the words “Boycott Macron” and “Boycott France” were pasted on street walls.

Masood and some prominent clerics along with 2000 more people were booked by the police for staging a demonstration defying Covid-19 restrictions.

“What the French President said is atrocious. He has insulted us and shows no remorse,” Maulana Syed Ali, a cleric from Mumbai told RFI.

The All India Muslim Personal Law Board appealed to all Muslims to boycott French goods.

Similar protests have been held in Bangladesh, Afghanistan, Pakistan, Mali, Mauritania and Lebanon.

Macron has taken a tough stance on radical Islam emphasising that France would not give up its values despite anger building against the caricatures.

This comes after the beheading of school teacher, Samuel Paty, on 16 October, who became the subject of an online hate campaign after he showed cartoons of the Prophet Mohammed to pupils in a civics class on freedom of expression.

Two weeks later three people were murdered at a church in Nice on Thursday, by a knife-wielding assailant who cried 'Allahu Akbar' (God is Great) before being apprehended by police.

Amid the protests held by Indian Muslims, the Indian government made its stand clear of standing with Macron, who has been criticised by leaders of the Muslim world, in particular Turkey's president Recip Tayyip Erdogan, who questioned Macron's sanity.

“We strongly deplore the personal attacks in unacceptable language on President Emmanuel Macron in violation of the most basic standards of international discourse,” the Indian foreign ministry statement said.

The statement went on to roundly condemned the recent attacks.

"There is no justification for terrorism for any reason or under any circumstance."

India has over 170 million Muslims in its 1.3 billion plus population and has the second largest population of Muslims in the world after Indonesia.