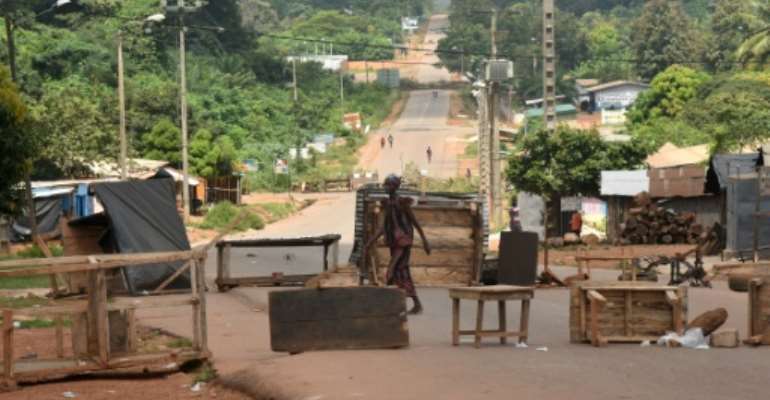 Standing by a large tree trunk blockading the road, Ivorian student Bernard Kouadio was determined to halt any voting in his hometown Daoukro.

Makeshift barricades made of chairs, tree branches and crates quickly went up in the opposition stronghold during Saturday's presidential election, heeding a call for a boycott from opposition leaders.

"There is no election in Daoukro," Kouadio said.

Polling stations did not open in Daoukro, fiefdom of Henri Konan Bedie, the veteran leader who called for a boycott and civil disobedience against President Alassane Ouattara's attempt to run for a third term.

In power for ten years, Ouattara says a reform allows him to reset the two-term presidential limit and run again, angering the opposition who says his bid breaks with the constitution.

Clashes over the third term have killed at least 30 people since August, reviving fears over the kind of violence that left 3,000 dead during a post-election crisis a decade ago.

Protests broke out in Abidjan and opposition strongholds during Saturday's election, which the opposition leaders called a failure for Ouattara's re-election bid.

In Daoukro, young men manning the barricades came out early to stop the ballot.

In Benanou, a village near Daoukro, not far from Bedie's residence, large tree trunks blocked the roadway leading to the town of Bocanda, 70 kilometres (45 miles) away.

Opposition youth blocked all access routes to Daoukro, a central town of around 70,000 inhabitants, effectively preventing the arrival of electoral material.

Economic activity was at a standstill, shops were closed, and no taxis were running.

Local officials were forced to reduce the number of polling stations, concentrating them on three sites, but they remained closed all day.

"There is an electoral desert. There is no vote in Daoukro or in all the neighbouring areas," said Jean Kouakou, activist for Bedie's PDCI party.

To prevent any clashes between rival ethnic communities who back competing sides in the election, 50 police and gendarmes were deployed on points of the main road that crosses the city from north to south.

The road is an invisible border between the two antagonistic districts of Baoulekro, named after the local ethnic group, and Dioulakro, home for Dioula, an ethnic group from the north of the country reputed to be pro-Ouattara, just two kilometres away.

Ivorian political loyalties are often tied to a leader's ethnic identity or regional roots in a country with more than 60 ethnic groups and where a 2002 civil war created a north-south divide.

Roads around Daoukro were blocked with tree trunks. By SIA KAMBOU (AFP)

In August, protests in Daoukro against Ouattara's candidacy degenerated into inter-ethnic violence killing at least three people in the town.

In front of the Plateau primary school in the Dioulakro district, around 30 Ouattara supporters stood on Saturday waiting for a chance to vote.

"A solution has to be found so that we can vote here in Daoukro. All we see is a blockade. Stopping us voting could lead to a conflict and we do not want clashes," said Kassoum Toure, head of the ruling party's local office.

"All we want is peace. We were born here in Daoukro and grew up together, we shouldn't be killed over elections," said local trader Bakary Bakayoko.

Shopkeepers kept their stores closed as the opposition boycotted the election in Daoukro. By SIA KAMBOU (AFP)

In the "Commerce" district, a pro-Ouattara activist spent Friday using a megaphone to urge people out to vote, guaranteeing security of voters.

Just a kilometre away, an opponent had walked through the Baoulekro district using a microphone to call on the inhabitants "not to go out to vote".

Locals said at the end of the day, traditional spiritual dancers, called "Adjanou" toured the polling stations to "cast a spell" on anyone who ventured to put a vote in the ballot box.