By Sarah TITTERTON with AFP bureaus 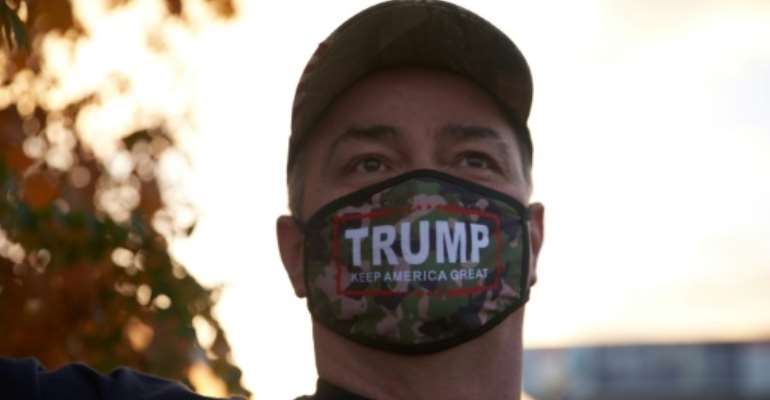 The United States saw a record number of new coronavirus infections for the second day running Friday, with more than 94,000 cases reported just days before voters decide if President Donald Trump should remain in the White House.

The skyrocketing caseload helped push the US tally past nine million cases reported since the pandemic began, while Europe topped 10 million and France entered a new lockdown.

The increasingly resurgent pandemic is forcing other countries to consider following suit -- but Trump has vowed the US will not be among them if he wins a second term on Tuesday.

The US set a daily record for new infections Friday, charting more than 94,000 in 24 hours according to a tally by Johns Hopkins University -- just one day after the previous high of 91,000.

Hospitals across the country were bracing as cases soar in nearly every state and winter flu season looms.

But on the campaign trail Trump, who says the virus will "disappear," remained defiant.

Democratic presidential candidate Joe Biden (left) accuses Trump of surrendering to the virus, but the president continues to defy his own administration's Covid-19 guidelines. By Angela Weiss, SAUL LOEB (AFP)

"We just want normal," he told supporters -- many of them unmasked -- at an outdoor rally near Detroit as he pushed states to relax public health restrictions and resume daily life.

He again bucked his own administration's health experts and dismissed the more than 229,000 Americans who have already died of Covid-19 as he downplayed the threat, saying "if you get it, you're going to get better, and then you're going to be immune."

Biden, who has sought to turn the November 3 election into a referendum on Trump's handling of the pandemic, has accused his Republican rival of surrendering to the virus.

"It is as severe an indictment of a president's record as one can possibly imagine, and it is utterly disqualifying," he said in a statement Friday.

Virus fears have also hit Wall Street, which suffered its worst week and month since March on Friday with another losing session as markets gird for the election.

'What are you waiting for?'

Belgium became the latest European country to tighten restrictions as virus numbers surge across the continent, which recorded 41 percent more cases this week than the previous seven days, according to an AFP tally.

Europe is now recording 241,000 new cases a day -- compared to 15,000 at the start of July -- and represented roughly half of last week's global infections.

Some Paris medics voiced fears that steady traffic showed the public was not taking the second lockdown seriously. By Thomas COEX (AFP)

Some 14 European countries meanwhile registered a record number of hospitalizations linked to the virus this week.

Italy posted its own daily infection record on Friday, fueling debate about whether it should follow France into a national lockdown.

"Over 31,000 cases and 199 deaths. I ask you one question: what are you waiting for?" virologist Roberto Burioni tweeted.

Belgium, which has the most Covid-19 cases per capita in the world, said it would impose tighter lockdown rules from Monday, closing non-essential businesses and restricting household visits.

France's 65 million people woke on Friday to a new lockdown, largely confined to their homes and needing written statements to leave.

Covid-19 cases and deaths per world region as of Oct 30. By Bertille LAGORCE (AFP)

But some medics voiced fears that steady traffic and appreciable numbers of people on public transport in Paris showed the public was not taking the lockdown as seriously a second time round.

"We don't have the choice, we are obliged to live, do our shopping and behave as if it is normal even if there are some safety measures," said Fabrice Angelique, 18, buying headphones at a books and electronics store in Paris.

A total of 49,215 new cases were recorded over 24 hours in France, according to official figures on Friday.

Nottingham became the latest of a swathe of cities across central and northern England to enter the highest tier of local restrictions Friday, with the 2.4 million residents of Leeds set to follow suit next week.

In the Czech Republic lawmakers voted to extend a state of emergency until November 20, while Iceland ordered bars and nightclubs closed and limited public gatherings to no more than 10 people.

But there has been resistance to measures to stop the virus, with clashes between protesters and police erupting on Friday in the Spanish city of Barcelona against new restrictions.

And thousands of people rallied in Warsaw and across Poland, defying government orders and risking coronavirus contagion to voice their anger at a court ruling banning almost all abortions.

In Russia, President Vladimir Putin said he had no plans to introduce a sweeping lockdown, even as the country saw record tolls with reports of ambulance queues at hospitals and medical shortages.

Protestors and police clashed in the Spanish city of Barcelona over new coronavirus restrictions. By Josep LAGO (AFP)

The virus also continued its march through Latin America and the Caribbean, with the region passing 400,000 deaths on Friday, according to an AFP tally.

There were however small glimmers of hope -- sometimes controversial -- in some countries.

In Slovakia, a government programme to screen its entire population of 5.4 million people for coronavirus with antigen tests in what would be a global first, was due to begin on Saturday.

There was also some good news for football star Cristiano Ronaldo, who tested negative for Covid-19 and will leave isolation in Italy after receiving a positive result on October 13.