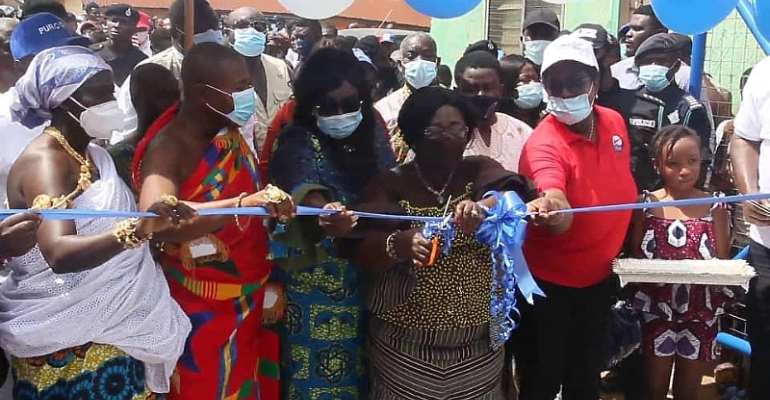 Chief of Staff at the Office of the President, Akosua Frema Osei-Opare, is appealing to Ghanaians to adhere to the health protocols to prevent new infections of the Coronavirus Disease (COVID-19).

She emphasised that though the nation had achieved successes in containing the viral disease, COVID-19 was not yet over, and everybody ought to protect one another by especially wearing nose masks in public.

The Chief of Staff reminded Ghanaians that handwashing with soap under running water and frequent use of hand sanitizers remained the surest remedy to stem new infections and nationwide spread of the pandemic.

Mrs Osei-Opare made the appeal when she inaugurated separate water projects constructed by the Public Utilities Regulatory Commission (PURC) under the Commission's Pro-Poor water programme for the chiefs and people of Susuanso, Adrobaa and Koforidua in the Ahafo Region.

The PURC started the implementation of its flagship pro-poor water programme in 2012 and is aimed at making potable drinking water accessible to poor and deprived communities in the country.

Mrs Osei-Opare said the government’s free water supply was aimed at ensuring that Ghanaians readily accessed water to have enough to wash their hands regularly and to promote personal hygiene.

She however, added the nation's strenuous efforts towards stemming the spread of COVID-19 would be unsuccessful, if the populace failed to comply with prescribed health safety protocols.

As a critical national resource, the Chief of Staff indicated accessing quality and potable drinking water was not only a basic need, but a necessity of life which every Ghanaian should not be denied of, saying scanty and lack of access to potable drinking water remained a major contributory factor to poverty.

She therefore praised the PURC in its efforts towards providing quality water to people in deprived communities, and asked the beneficiaries to take good care of the facilities.

Mrs Mami Dufie Ofori, the Executive Secretary of the PURC, said the Commission had invested more than GhC3 million into its 2019/2020 pro-poor water projects nationwide which included; mechanised boreholes with a 10,000 litre elevated storage tanks on reinforced concrete platforms.

She expressed the optimism that 49 water projects would ensure not only easy access to potable drinking water, but an efficient and regular water supply for the beneficiary communities to meet the requirement for a reliable, and sustainable and improved water supply.

The funding of the pro-poor water programme, she explained that it was in line with the PURC Act, 2010 (Act 800) as amended which provided the necessary legislative framework for funding the programme.

She said electricity had also been extended to more than 32 deprived communities in the area within the past three and half years, and expressed the hope that the people would vote to retain President Nana Addo Dankwa Akufo-Addo's government in the December 7 polls to see remarkable improvement in their socio-economic livelihoods.

Ms Prempeh reminded the people of Susuanso as one of the strongholds of the New Patriotic Party (NPP) since 1992, the government would ensure all their basic developmental needs were provided.