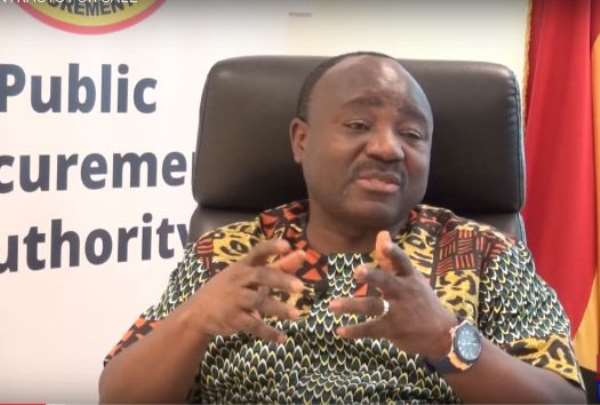 President Akufo-Addo has terminated the appointment of the Chief Executive Officer of the Public Procurement Authority (PPA), Adjenim Boateng Adjei.

This was announced in a statement issued by the Communications Director at the Presidency, Eugene Arhin.

“This follows the submission of a report to the President by the Commissioner of the Commission for Human Rights and Administrative Justice (CHRAJ), Mr Joseph Whittal, in which the Commission concluded that, on the totality of the evidence, Mr Adjenim Boateng Adjei had put himself in a position where his personal interests conflicted with the performance of his functions as CEO and Board Member of PPA,” the statement said.

The statement recalled that on August 22, 2019, President Akufo-Addo, suspended Mr Adjenim Boateng Adjei From Office following the broadcast of allegations made against him in an investigative documentary conducted by Manasseh Azure Awuni, titled: “Contracts for sale”.

It further recounted that the President subsequently referred the allegations involving conflict of interest to CHRAJ, and those relating to potential acts of corruption to the Office of Special Prosecutor, for their action.

Mr Adjei was found in the documentary to have been awarding numerous procurement contracts to companies that he and his wife had ownership in.

“Having satisfied himself of the fact that the recommendation made by CHRAJ is properly motivated and well-founded, the President has expressed his appreciation and gratitude to Mr Joseph Whittal and CHRAJ for the thorough and methodical manner in which the matter has been addressed.”