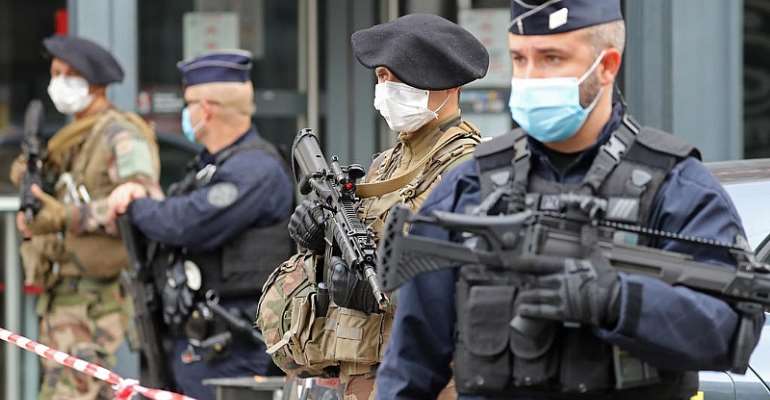 French authorities have deployed 7,000 extra police officers and soldiers to patrol schools and religious sites in the wake of the attack in Nice in which three people were knifed to death.

Interior minister Gérald Darmanin ordered the measures as French nationals abroad were warned to be on their guard following vociferous anti-French protests as well as an assault on the sentry box outside the French embassy in Jeddah in Saudi Arabia and scuffles near the embassy compound in Beirut.

“There's a threat everywhere,” said French foreign minister Jean-Yves le Drian on Friday. “It has gone from words of hatred to actual violence. We have to take action to protect our interests and our people.”

On Thursday morning in Nice, three people were killed at the Basilique Notre-Dame in the city centre.

A 21-year-old suspect, Brahim Issaoui, was recovering in hospital on Friday after he was shot by police.

The Nice attack came nearly two weeks after police shot and killed 18-year-old Abdullakh Anzorov after he murdered teacher Samuel Paty in Conflans-Sainte-Honorine just outside Paris for showing caricatures of the prophet Mohammed during college lessons on the freedom of speech.

The cartoons were those published by the French satirical magazine Charlie Hebdo which was attacked in 2015 by Islamist extremists.

After emerging from a specially-convened session of the defence council on Friday, Darmanin said security would be stepped up around schools and colleges which are due to return from their autumn breaks on 2 November.

The heightened alert follows comments from the French president Emmanuel Macron who said his country would champion the freedom of the media to publish caricatures and cartoons considered blasphemous in other countries.

In Dhaka in Bangladesh, demonstrators called for a boycott of French goods and burned effigies of the French leader.