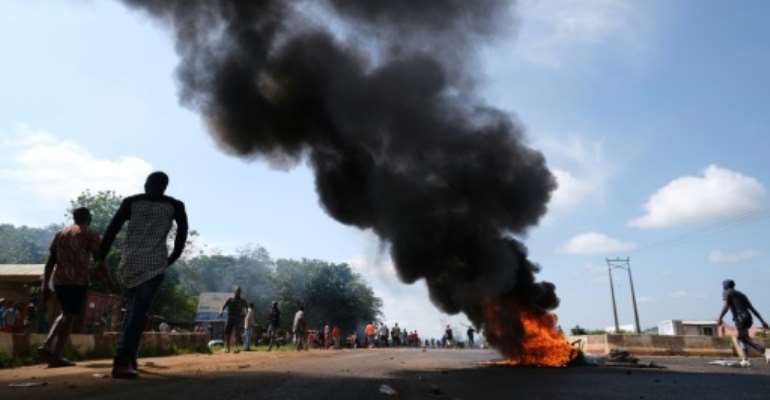 Nigeria has been gripped by several weeks of protests over police brutality. By Kola Sulaimon (AFP/File)

Solomon, Patrick and Samuel were wounded on October 20 during a crackdown by Nigerian security forces on protesters in Lagos who had gathered despite a curfew order.

The three say they spent several days at the Lekki toll gate, the epicentre of demonstrations that erupted on October 8 over police violence and bad governance, as they themselves had been victims of police abuse in the past.

Now discharged from hospital, the three men -- whose full names are being left anonymous for safety reasons -- are desperate for their stories to be heard.

It was the Nigerian army who fired, all three said.

The government denies any responsibility and labeled reports that soldiers killed 12 people as "fake news". The police on Friday said 22 officers had been killed in protest-linked unrest this month.

"How can they say it's not true?," asked Patrick.

"We saw them. Two guys died instantly in my presence, and one is still in the coma -- my friend Nicholas," said the 25-year-old demonstrator, unemployed since a lockdown in March imposed to contain the coronavirus.

Shot in the arm -- he was brandishing a flag when he came under fire -- Patrick was evacuated, put on a canoe that crisscrossed the Lagos lagoon and took him to a hospital.

"The soldiers were blocking the roads, the ambulances could not access the scene. Some were using bikes, others wheelbarrows to take the injured," he said.

Samuel, 30, was helping to ensure safety at the protest ground with a group of volunteers when he heard the first gunshots.

"We saw armed, military men, so we came back to the stage and started waving our flags and singing the national anthem."

"I was not expecting them to shoot at us," said the young man, who works in agriculture in the outskirts of the sprawling city.

"I was expecting them to address us in a normal manner. But they didn't talk to anybody, they just started shooting."

"All of a sudden I started feeling something hit my left thigh," he remembered. The screen of his phone might have saved him -- the bullet would have otherwise penetrated even deeper.

In pain, he managed to walk 500 metres (yards) to find someone who could take him to hospital.

"I saw like three people dying, but I was also injured, so I couldn't help them. I had to help myself first."

It was a close call for Solomon as well. A bullet pierced his shoulder, and another grazed his neck, leaving a burn scar.

The 38-year-old construction worker is still in shock.

"The country doesn't realise what happened, but for me this is not the end, this is just the beginning of the protests," he told AFP.

"I need a better Nigeria. This wound made me even more ready to fight, I have nothing to lose anymore."