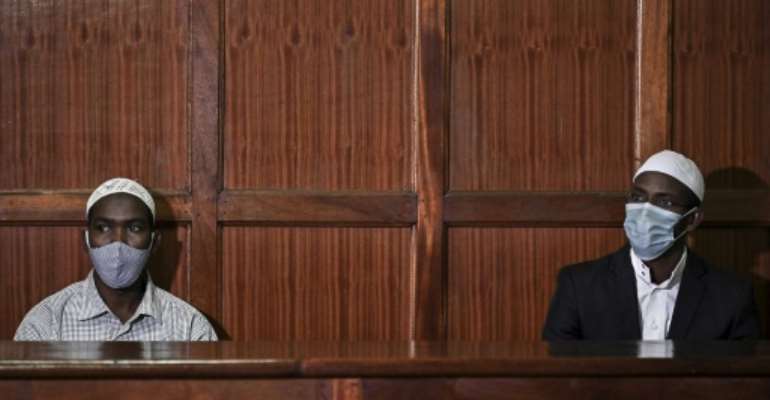 In the dock: Hassan Hussein Mustafa, left, and Mohamed Ahmed Abdi awaiting the verdict on Friday. By TONY KARUMBA (AFP)

A Kenyan court Friday handed prison terms of 33 and 18 years respectively to two men accused of conspiring with the Al-Shabaab extremists who attacked Nairobi's Westgate shopping mall in 2013, killing 67 people.

Mohamed Ahmed Abdi and Hassan Hussein Mustafa, both 31, were found guilty on October 7 of conspiring with and supporting the four assailants from the Somalia-based jihadist group who died in what was then Kenya's worst terrorist attack in 15 years.

The pair, wearing Islamic prayer caps and face masks, asked the judge for leniency, saying they had already served seven years behind bars and had family to care for.

"Despite mitigation by their defence lawyers on their innocence, the offence committed was serious, devastating, destructive, that called for a punishment by the court," Chief Magistrate Francis Andayi told a Nairobi courtroom.

He sentenced the pair men to 18 years for conspiracy and 18 for supporting extremists, but ordered they serve both terms together. Abdi was also given an additional 15 years for two counts of possessing jihadist propaganda material on his laptop.

He will serve 26 years and Mustafa 11, taking into account their pre-trial detention.

The convicted men were in regular contact with the attackers who at midday on September 21, 2013, stormed the upscale Westgate mall in the Kenyan capital and began throwing grenades and firing indiscriminately on shoppers and business owners.

A four-day siege ensued -- much of it broadcast live on television -- during which Kenyan security forces tried to flush out the gunmen and take back the high-end retail complex.

Although there was no specific evidence Abdi and Mustafa had provided material help, the court was satisfied their communication with the attackers amount to supporting the armed rampage, and justified the guilty verdict for conspiracy.

The marathon trial began in January 2014. A third accused was acquitted of all charges.

The Westgate attack was claimed by Al-Shabaab in retaliation for Kenya intervening military over the border in Somalia, where the Islamist group was waging a bloody insurgency against the fragile central government.

Kenya is a major contributor of troops to the African Union Mission in Somalia (AMISOM), which in 2011 drove Al-Shabaab out of Mogadishu and other urban strongholds after a months-long offensive.

Destruction: A section of the Westgate mall after the assault. By HO (KENYAN PRESIDENCY/AFP/File)

In a car the attackers drove to Westgate, police found evidence of newly-activated SIM cards used by the gunmen. Their communications were traced, including calls to Mohamed Ahmed Abdi and Hassan Hussein Mustafa.

A fourth defendant, Adan Mohammed Abdikadir, was acquitted in early 2019 for lack of evidence.

The Westgate attack was the deadliest incident of violent extremism on Kenyan soil since the 1998 bombing of the US embassy in Nairobi, which killed 213 people.

Grief: Kenyans launched prayer vigils for the victims of the massacre. By CARL DE SOUZA (AFP)

But since the assault on the shopping complex, Al-Shabaab has perpetrated further atrocities in Kenya against civilian targets.

In April 2015, gunmen entered Garissa University and killed 148 people, almost all of them students. Many were shot point blank after being identified as Christians.

Al-Shabaab warned in a January statement that Kenya "will never be safe" as long as its troops were stationed in Somalia, and threatened further attacks on tourists and US interests.

That same month, Al-Shabaab attacked a US military base in northeast Kenya in a cross-border raid, killing three Americans and destroying a number of aircraft.