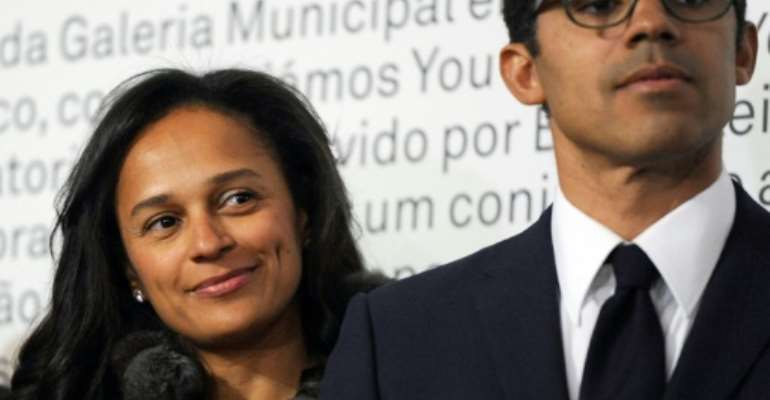 Isabel dos Santos and husband Sindika Dokolo, pictured at an art exhibition in Portugal in 2014. By FERNANDO VELUDO (PUBLICO/AFP)

Dokolo, a business tycoon and leading arts collector, became entangled along with his wife in a major anti-corruption investigation launched after her father, Jose Eduardo dos Santos, left office in 2017.

He died in Dubai on Thursday, according to a notice posted on Twitter by the family. It did not state the cause of death. Dokolo was 48.

"The Dokolo family, his wife, children, mother, brother and sisters have the deepest sorrow and immense sadness to announce the passing of Sindika Dokolo, which occurred on October 29, 2020 in Dubai," said the announcement.

Dos Santos on Thursday posted on Instagram a picture of herself, Dokolo and a young boy, with a caption "My love."

Media reports in the neighbouring Democratic Republic of Congo, of which Dokolo was a national, said he had died in a diving accident.

Dokolo had interests in oil and diamond businesses in Angola and abroad but was also well known for his large collection of thousands of pieces of contemporary African art.

Last year his foundation bought advertising on the NASDAQ electronic billboard in New York's Times Square to highlight his flagship project of returning to Africa artworks seized during colonial rule.

At the time of his death, Dokolo and dos Santos, 47, were under investigation by Angolan authorities, which had frozen their bank accounts and business assets on New Year's Eve.

His wife, nicknamed "the princess" by many Angolans and described by Forbes as Africa's richest woman, is ex-president dos Santos's first daughter.

He ruled Angola for 38 years -- an era widely associated with corruption and nepotism -- before stepping down in 2017.

Under his chosen successor, Joao Lourenco, prosecutors have launched probes into the disappearance of billions of dollars in a country where a third of the population lives in poverty.

In August, the Supreme Court handed a five-year sentence to the ex-president's son, Jose Filomeno dos Santos, for fraud arising from the time when he headed Angola's sovereign wealth fund, from 2013 to 2018.