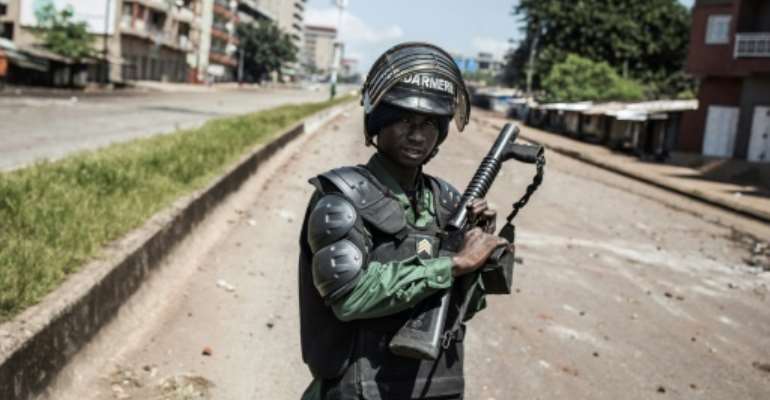 Since Guinea's election, there have been lethal clashes between opposition supporters and security forces. By JOHN WESSELS (AFP)

Protests against Guinea's President Alpha Conde are set to resume next week, the political opposition said Friday, after 10 losing candidates in the country's election rejected the official outcome.

Addressing a news conference in the capital Conakry, losing candidate Makale Traore pointed to "serious irregularities recorded before, during and after the vote", including "substitutions and falsifications" of the results.

"The participants decided to categorically reject the provisional results," she said, referring to the group of 10 losing candidates.

The move triggered lethal clashes between opposition supporters and security forces across the West African nation of 13 million people. Regional leaders also sent envoys to mediate between Conde and Diallo.

Twenty-one people died in the post-election violence, the government said.

Diallo, who was at the conference, told reporters on Friday that "more than 30" people had died.

He added that anti-Conde protests -- which have wracked the country on and off for months -- would resume on Tuesday, after he had filed an appeal against the election results to constitutional court, which still has to sign off on the official tally.

"We will resume peaceful demonstrations in the streets and public squares to denounce the ongoing electoral hold-up and demand recognition of our victory," he said.

The European Union, United States and the former colonial power France all released statements this week expressing concern about the vote-counting process.

Traore also told reporters that each member of the group of 10 losing candidates would file appeals .

Alluding to suspicion about the court's independence, she urged judges to only examine the legal basis of their pleas, "to avoid endangering the social peace and stability of the country".

Twelve candidates in total contested the election, including Conde and Diallo.

Much of the turbulence in Guinea centres on a third term for the octogenarian president, whom opponents accuse of drifting into authoritarianism.

Opposition to that move had provoked mass protests from October 2019, in which security forces killed dozens of people.

During recent post-election violence, police also barricaded opposition leader Diallo inside his home -- in a blockade that was lifted on Wednesday.

Conde was a former opposition leader who was once sentenced to death in absentia, before becoming the country's first democratically-elected leader in 2010. He won re-election in 2015.