Tears and tributes for victims of Nice church attack 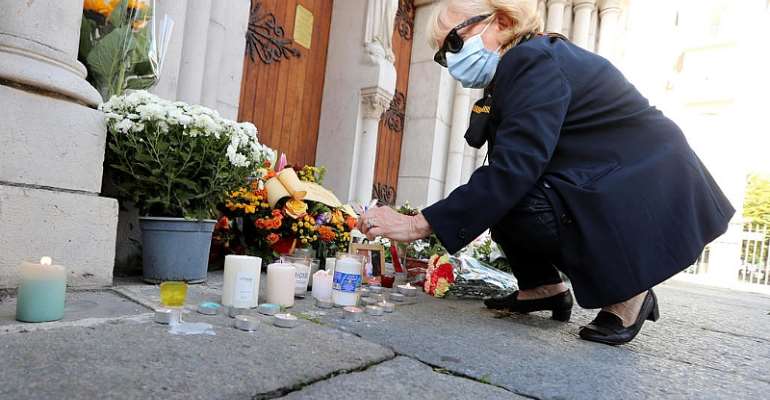 In the media panic that followed the attacks at Notre Dame Basilica in Nice, they were simply "the victims". All we knew is that they were two women and one man. A day later, the profiles of three individuals are emerging, as sorrow replaces shock over their killing.

The murdered sacristan of the basilica, Vincent Loquès, was one day short of his 55th birthday, and the father of two girls.

He was known to all in the local Catholic community for his smiling presence. "He helped people, he was available, he was generous," according to an account in today's Nice Matin newspaper.

Born in the mountains inland of the Mediterranean city, Vincent Loquès had been working as sacristan at the Notre-Dame basilica in Nice since 2013.

He was responsible for the general running and upkeep of the building, as well as preparations for services and special events.

"He loved this church," said parish priest Father Jean-Louis Giordan. "He was always doing something to make it more beautiful. He was full of plans for the feast of All Saints."

'Full of dreams and vitality'

Another victim has been named by Brazil's foreign ministry as Simone Barreto Silva, a 44-year-old who worked as a carer for the elderly. Born in Brazil, she held French nationality.

In a statement, the foreign ministry said it lamented and condemned the "heinous attack” on Silva and offered support to her family, according to a report in The Guardian newspaper.

“President Jair Bolsonaro, in the name of the whole Brazilian nation, offers his profound sympathies to relatives and friends of the murdered citizen, as well as the other victims, and solidarity to the people and government of France,” the foreign ministry statement said.

Friends and relatives paid tribute to Silva, who had three children. “May God protect your soul up there in heaven,” one cousin wrote on social media. “You were a woman so full of dreams and vitality.”

Few details of the third victim, a woman of 60 years, had been made available.

The French Council of Bishops, representing the top layer of the local hierarchy of the Catholic Church, have denounced the crime, without mentioning Islam specifically. "We know we are a target," the bishops said in statement, "but we refuse to yield to fear of this blind and treacherous menace."