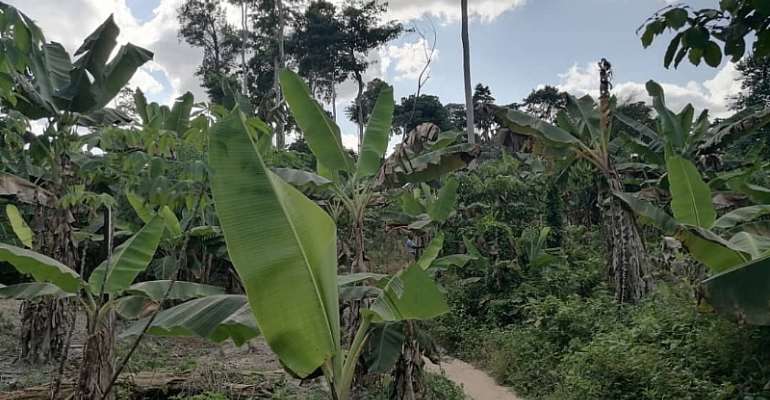 Residents of communities in the Sefwi Wiawso Municipality of the Western North region have appealed to authorities to save the Tano Suhien Forest Reserve from total destruction.

The Forest Reserve is losing its virginity to illegal farming and felling of trees.

The rate at which the reserve is being encroached is alarming and residents fear that their livelihoods will be heavily affected. Urgent measures are therefore needed to protect the Reserve and the landscapes before losing it in less than 10 years.

Forest resources contribute about 38% to the total income of Ghana's forest dwellers and about 6% annually to the Gross Domestic Product of the country. However, with the current rate of deforestation, Ghana's forests could completely disappear in 25 years. The decline of the resource will negatively impact on the livelihoods of those who depend directly on the forest and the economy of the country as a whole.

The Western North region is known for rapid loss of forest reserves. The Sukusuku Forest Reserve and Bia Torya Forest Reserve in the region have been lost to farmers who heavily encroached upon them and cleared the area for cocoa farms.

The Tano Suhien Forest Reserve, a production forest reserve with a total area of 84.4 km2, is being degraded at a faster pace. A drone analysis and ground truthing based on alerts from community monitors have revealed a disturbing picture. Nearly 60% of the area has been degraded, constituting over 13km2 of the reserve.

To protect these forest reserves and landscapes, Tropenbos Ghana, through the Non-State Actors (NSA) programme, works with community forest monitors who give alerts on critical issues affecting landscapes and forest reserves. Unfortunately, these community monitors have become targets in their various communities. They have been crying out on threats issued to them, some of which directly target their lives.

Speaking on condition of anonymity, a middle-aged lady narrates how she receives physical threats from people who are bent on carrying out their illegal activities on the forests and landscapes, for what they term “spying on them.”

“As part of efforts to restore the forests and landscapes, Tropenbos Ghana supports us to plant trees. But chainsaw operators burn and destroy the forests indiscriminately, including the trees we plant. Recently, the wife of a chainsaw operator threatened to sprinkle petrol on me in my room and burn my household, because she suspects I have been speaking against her husband’s illegal chainsaw activities,” she said.

A 32-year old male community monitor also lamented that there are open threats on them because they try to prevent illegal activities in forests and landscapes. He indicated that he had received threats from a chainsaw operator because he had caused his equipment to be seized. “We the community monitors face many challenges in the discharge of our duties. Paramount among the challenges are the open threats we receive on a daily basis from people who are determined to destroy our forests and landscapes for their individual selfish interests. I have been receiving death threats, the recent one coming from a timber contractor because I had caused his equipment to be seized,” he said.

Low commitment and enforcement of forest and wildlife laws have contributed to increased encroachment of the forest reserves. Major issues that favour the encroachment include collusion between farmers and chiefs, low court fines, a quest for fertile land and inadequate monitoring. One means to curb the menace is to identify and tackle the drivers of forest loss – the physical human induced and location-specific drivers of deforestation, such as agriculture.

Intensifying agricultural activities can offer a wide range of benefits, given how much of the forest reserves has already been lost. First, it can save the forest and its biodiversity since farmers will no longer depend on forests as a source of fertile land for agricultural production. Second, the food needs of smallholder farmers will be met and the surpluses marketed to increase the income portfolio of farm households. Third, agricultural intensification will enable smallholder subsistence farmers to transition to become commercial farmers without expanding their land holdings.

Additionally, employing technology to decrease post-harvest losses and wastes and ensuring efficiency in the food chain system can be a significant pathway out of poverty as it will ensure sustained food supply to manage the increasing population and minimise pressure on the remaining forests to provide biodiversity conservation benefits.