Fears and flight as Ivory Coast braces for vote 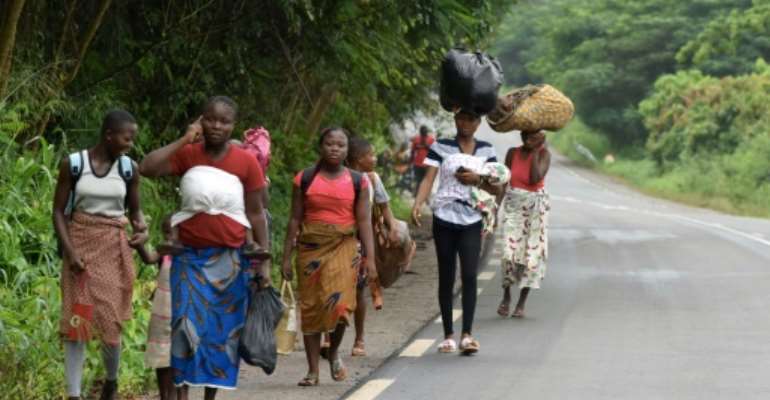 When fighting broke out between rival Ivorian factions 10 years ago, Veronique Yao left it late to flee Abidjan to her home town, a three-hour bus ride away.

Two days before Ivory Coast's Saturday election, she was taking no chances.

Yao and her young son packed their suitcases and joined other passengers jostling onto buses out of Abidjan, fearing a repeat of the 2010-2011 crisis when fighting turned the city into a battleground and left 3,000 dead.

President Alassane Ouattara's decision to run for a third term has been rejected by the opposition, triggering sporadic clashes between rival communities. In Abidjan, some are fleeing the city; others are preparing to hunker down and stock up on provisions.

"I don't want to live again what we lived though in 2010," Yao, a street seller, said before boarding for the central town of Tiebissou on Thursday.

"If everything goes well, then we will be back. All depends on how things go."

At least 30 people have died in clashes over Ouattara's third term, mostly in the south, between local ethnic groups and Diaolu communities seen as close to the president, himself a Muslim from the country's north.

A former IMF official, Ouattara is praised by supporters for bringing stability and economic growth to the world's top cocoa producer after a decade of instability.

A policeman gestures next to a car in Abidjan's Cocody district that was torched in anti-Ouattara protests on October 19. By SIA KAMBOU (AFP)

Earlier this year, the Ivorian leader said he would step aside for a younger generation after his second term. But he changed his mind when his chosen successor suddenly died.

Ouattara says a reform in 2016 allows him to bypass a two-term presidential limit, angering adversaries who say his bid is illegal.

The crisis pits Ouattara against old rivals whose animosities have marked Ivory Coast's politics for decades, leaving many worried over a repeat of past factional fighting.

Opposition leader and former president Henri Konan Bedie has called for a boycott of the vote and a campaign of civil disobedience.

The United Nations appealed for calm, but tensions are building over whether rivals will accept the election results.

"It is the same threat as in the past," said Sandrine Dia Amoin, who was travelling to the capital Yamoussoukro. "I am better off being with my family."

Ivory Coast emerged from a civil war after 2002 that left the country split in two: the north held by rebels and the south controlled by then president Laurent Gbagbo.

Ouattara won a long-delayed 2010 vote, but Gbagbo refused to leave power as the country slid into fighting between his forces and Ouattara loyalists.

With Gbagbo holed up in the city, Abidjan was rocked by street fighting before French intervention eventually helped Ouattara's troops capture the former president.

Since then, Ouattara has presided over a period of relative stability and helped Ivory Coast secure its status as a regional economic hub with record growth.

President Alassane Ouattara used a helicopter to make a dramatic appearance at his final rally on Thursday. By SIA KAMBOU (AFP)

"He is the one who helped rejuvenate the country. He has a positive record," said Aisha Konate, at a rally in the poor Abobo district, an Ouattara stronghold that was scarred by battles in the last crisis.

But past traumas linger and old feuds still seethe in a country where political loyalties and ethnic identities often overlap.

"My grandmother told me 'you cannot stay in Abidjan, in the village you will be safe,'" said a 23-year-old waitress who left the city. "I bought powdered milk and provisions and took the bus."

Koaume, a pool cleaner, stayed in Abidjan stocking up on rice.

Social media has not helped. Rival accounts spread accusations over weapons arriving in Abidjan or recycled images from past violence.

In August, a photo of French troops arriving in Abidjan triggered rumours they were dispatched to back Ouattara as they did before. It was just a planned relief contingent.

Ahead of Saturday's vote, both sides accused each other of stoking tensions in this ethnically diverse country for electoral gain.

The opposition claims Ouattara's government has unleashed gangs of young thugs labelled "microbes" on their rallies, a charge he dismisses by accusing his foes of attacks.

Violence has been sporadic for now. At least four towns in the south saw clashes between communities, often during opposition rallies that ended in tit-for-tat attacks, looting and burning homes in rival neighbourhoods.

Night-time violence in Yao's Abidjan neighbourhood left several cars in flames. Who was involved was not clear. But it was enough for her to pack up and leave the next day.

"Before, I wasn't sure about leaving," she said. "But that made the decision for me."