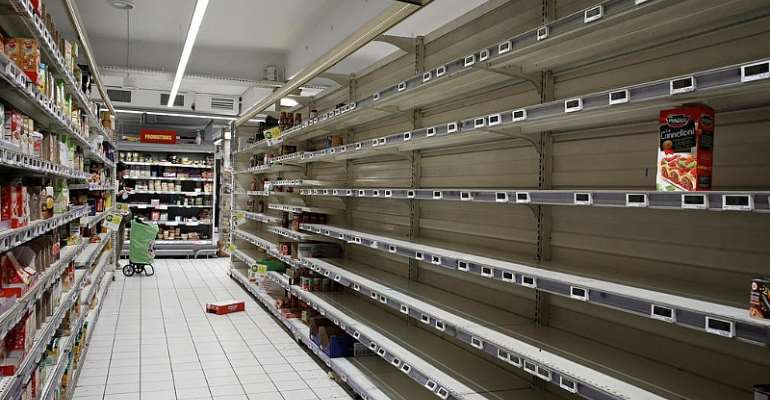 Many stores and businesses across France have been left with bare aisles as people raced to stockpile supplies ahead of a new Covid-19 lockdown that came into effect at midnight Thursday.

"I'm stocking up, since we don't know when this will end," said Catherine Debeaupuis, shopping at an electronics retailer in central Paris on Thursday.

On the eve of a new lockdown announced by French President Emmanuel Macron on Wednesday, essentials like pasta and toilet paper were in high demand, as were printer ink and electronics for working from home. Yoga mats were not to be found at many sporting goods stores.

Like others in a crowded Paris supermarket, Mourad Amarouche was loading up on toilet paper and pasta for his family.

"Just one of each, we're going to stay calm," he said. "There won't be any shortages, but I'm hoping not to have to come back tomorrow, when there will be tons of people."

Hairdressers were turning away desperate customers, many of whom were not convinced the lockdown would ease on 1 December as Macron said he hoped.

"Give me something that will last for a while," said Oulaya, a 50-year-old woman who managed to get a spot at the Angelo Capelli salon on the Place de la Republique in eastern Paris.

At the La Defense business district west of the capital, employees made a final commute to transfer landlines to mobile phones or give office plants a last watering.

Several people dragged suitcases to empty out their offices of important files or laptops.

With many Parisians seeking to flee to country homes or other havens to ride out the lockdown -- the national traffic agency reported unusually large traffic jams in the capital on Wednesday evening, just before Macron spoke.

And as the exodus continued Thursday, others had to resign themselves to long hours stuck at home, many of them in small city apartments.

Economy Minister Bruno Le Maire said the second confinement will cause a near 15-percent drop in economic activity, but the government will provide 15 billion euros per month in aid to affected businesses.