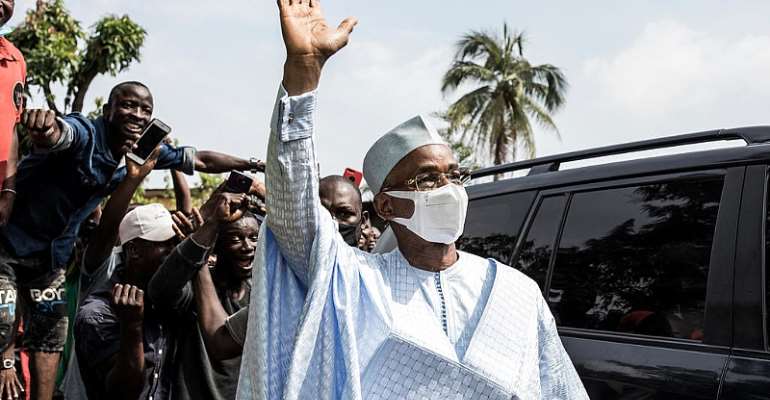 A security blockade around the residence of Guinea's main opposition leader, Cellou Dalein Diallo, has been lifted and security forces have withdrawn from opposition strongholds on the outskirts of the capital, Conakry.

The delegation urged to the government to lift the security blockade around Diallo's residence after he declared himself the winner before the electoral commission announced the final results of the 18 October presidential election.

“We are here in Guinea to help calm the post-electoral clashes,” said Jean-Claude Kassi Brou, a member of the Ecowas commission, calling it a “diplomatic-preventative” visit.

At least 21 people killed in post-election violence in Guinea

An uneasy calm returned to Guinea on Thursday, following days of post-election violence. Conakry residents who had been holed up in their homes were once again free to walk the streets after city-wide security measures were lifted.

Vehicular traffic has resumed in opposition strongholds in Conakry and shops and other businesses are gradually reopening. Some units of the military, the police and gendarmes are still  deployed.

“These past few days I have been at home without going to the markets and I've been out of cash,” Mohamed Ba, a trader, told RFI.

“With the lifting of the security blockade I can now walk freely,” he said.

President Alpha Condé was declared the winner last Saturday by the electoral commission amidst claims of electoral fraud by opposition candidate Cellou Dallein Diallo, who provided an electoral tally that showed discrepancies in the vote count.

The US government also raised issue regarding the vote. "We express concern about the questions raised by election observers and civil society on the lack of transparency in vote tabulation and incinsistencies between the announced results and tally sheet results from the polling stations," according to a US State Department statement.

Condé ran for a controversial third term in office after the constitution was revised in a referendum in March to allow more than two presidential mandates.

Minister of justice Mory Doumbouya said more than 200 people have been arrested in connection with the recent post-election violence.

The government called on the army to intervene and help restore and law and order.

Several people were killed in clashes prior to the intervention of the military. Several members of the security forces were shot and killed by unidentified armed men in the opposition strongholds of Sonfonia, Wannindara in Conakry and Labé in the interior of the country.

Opposition leader Diallo accused the police and gendarmes of killing more than 30 of his supporters, while the government said 20 were shot dead during the violence.

President Alpha Condé paid a visit on Wednesday to those wounded and being treated at government hospitals in Conakry. These includes members of the security forces as well as civilians.

Condé announced that the government would take care of all medical bills for both the military and civilian wounded.

The tripartite high-level delegation had urged both parties call on their supporters to stop the violence immediately.

The Ecowas-UN-AU dignitaries advised both parties to take their complaints to the constitutional court, adding that they deplored Diallo's self-claimed victory before the electoral commission had announced the results.

Diallo accused the delegation of supporting Condé, but agreed to file his complaint in court.

Although Diallo is no longer under house arrest, it remains to be seen whether he will escape indictment by the Guinean judiciary. The government has accused him of inciting post-election violence after he declared himself the winner.