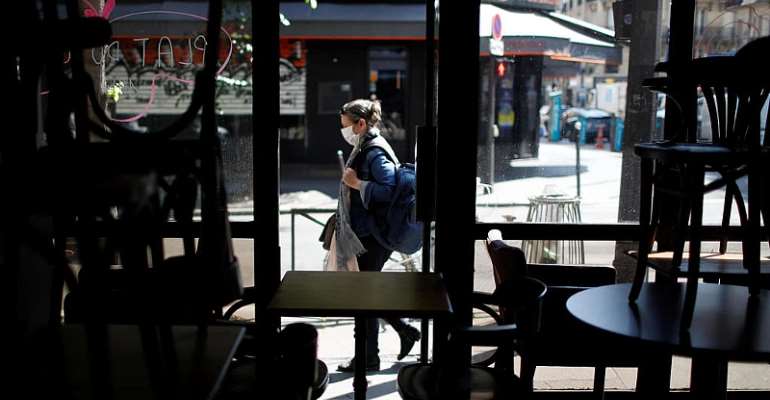 French restaurant owners are crying foul in the wake of new lockdown orders they say will deliver a fatal blow to a sector that's already been brought to its knees by ever-tightening coronavirus restrictions.

Restaurants and cafés across France were hurriedly getting their affairs in order on Thursday as they prepared to shut up shop for at least the next month. Some, it is feared, may never reopen.

“This is a death sentence for us,” said Bordeaux-based celebrity chef Philippe Etchebest in an angry interview with France Info radio. "We are in shock. We've done everything that needed to be done and now we're being closed.”

A nighttime curfew in place for the past two weeks has already taken a toll on French restaurants – identified as virus hotspots – with frustrated owners complaining that ambiguous sanitary protocols have been too hard to follow.

Under France's second nationwide lockdown, which takes effect at midnight Thursday, all restaurants, bars and non-essential businesses will be closed until 1 December, and residents told to stay home. Exceptions include school drop offs, work, medical appointments and grocery shopping.

Another TV chef, Michel Sarran, said he was forced to close his Toulouse restaurant shortly after the 9pm curfew was announced on 16 October, because it was simply too costly to stay open without a dinner service.

“At first we opened just for lunch then, after taking stock, we decided to close outright,” Sarran told CNews TV. "It's terrible but we lose money by being open … this situation is very serious for the restaurant industry.”

France's hotel and catering sector union fears many businesses will be forced to close for good by the end of the year, putting hundreds of thousands of people out of work.

Figures from the Union of Hotel Trades and Industries (UMIH) indicate more than 30,000 establishments will likely file for bankruptcy.

“All the professionals I represent are in an extremely precarious situation," said UMIH national catering president Hubert Jan, himself a restaurant owner in Brittany. “This is once again a forced and brutal closure, just like the one we endured in March,” he told France Bleu radio.

The future of the restaurant and hotel sector will very much depend on the level of compensation the state decides to give businesses, says Guillaume Manikowski, joint owner of Paris's historic Hotel du Nord restaurant on the Canal St Martin.

“We're going to lose money because we're not going to work – and we still don't know if we will have to pay our rent,” Manikowski told RFI, conceding that a feared 7pm curfew would have left restaurants even worse off.

“With our charges at maximum, that would have been harder because then we'd be actually working to lose money.”

While some restaurants in other countries have managed to adapt to lockdown conditions by offering a takeaway or delivery service, in France the traditional eat-in model has been harder to reinvent.

“With French cuisine, you have a lot of meat to cut, plus dishes with sauce that are less suitable for take-away sales,” Manikowski says. “People who want take-away food tend to go for pizza, sushi and things that are easy to eat.”

Food delivery services such as Deliveroo, while popular in cities, aren't a feasible option for restaurants in difficulty because the profit margin is too low once the commission charges are deducted.

“Home deliveries can complement the services restaurants offer, but they cannot replace them,” Manikowski explains. “Once they take their 25-30 percent, and once you add 10 percent TVA, you can't make money with what's leftover.

“People need to know that, in France, the restaurant owner is the very last person to make any money.”