France back in coronavirus lockdown as US surges to daily record 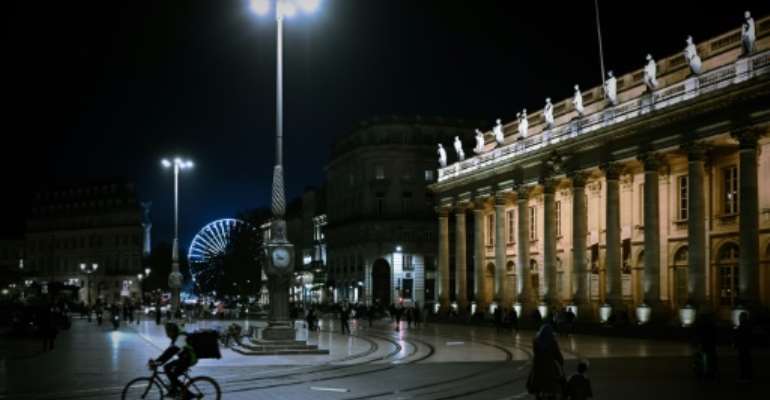 France is back in lockdown as the country tries to get a grip on the surging pandemic. By Philippe LOPEZ (AFP)

France headed into a second lockdown on Friday as the resurgent coronavirus pandemic hit new heights in the United States with a daily record of more than 90,000 cases, just five days before the presidential election.

From midnight, France's 65 million population were largely confined to their homes, needing written statements to leave, in the latest drastic measure to curb a disease that has infected more than 44.5 million worldwide and killed nearly 1.2 million.

And in the latest bleak warning, the United Nations' biodiversity panel said future pandemics will be more frequent, deadly and economically damaging, without a fundamental change in the way humans treat nature.

The United States, where President Donald Trump will seek re-election on November 3, announced 91,295 new cases in 24 hours, surging past the 90,000-mark for the first time.

Trump's handling of the pandemic in America, the world's worst-hit county with 8.94 million cases, has been a key theme in the election campaign, where he trails Democrat challenger Joe Biden in national polling.

Millions of people raced to buy supplies ahead of France's new lockdown, with essentials like pasta and toilet paper in high demand, as well as printer ink and yoga mats.

Healthcare systems around the world have been put under immense pressure by the pandemic. By Tiziana FABI (AFP)

"I'm stocking up, since we don't know when this will end," said Catherine Debeaupuis, shopping at an electronics retailer in central Paris.

The lockdown is scheduled to last a month, with bars and restaurants also closed until at least December and travel between regions limited.

Factories and building sites will remain open, as will creches and schools -- although children aged six and up must wear masks in class.

More than 8 million people are known to have been infected with the disease in India, the second largest total for any country, behind the United States. By Jewel SAMAD (AFP)

President Emmanuel Macron has warned that the second wave "will probably be more difficult and deadly than the first", although he insisted this lockdown would be less severe than measures imposed in the spring.

The lockdown in France, where 36,000 have died, is part of a series of renewed anti-virus restrictions around Europe, which is back at the pandemic's "epicentre" according to the World Health Organization.

More than 8 million people are known to have been infected with the disease in India, the second largest total for any country, behind the United States. By John SAEKI (AFP)

In Germany, Chancellor Angela Merkel has ordered a lighter round of shutdowns from Monday, closing bars, cafes and restaurants, as well as theatres, operas and cinemas.

Spain's parliament on Thursday approved a six-month extension of the country's state of emergency, which was declared on Sunday for an initial two weeks.

Sweden, known for its light-touch approach, recorded its highest number of infections for the second day in a row, prompting a warning for people in the capital and the country's more densely populated south to avoid social interaction.

Russian President Vladimir Putin said he had no plans to introduce a sweeping lockdown, even as the country saw record tolls with reports of ambulance queues at hospitals and medical shortages.

Even Halloween has a Covid-19 theme this year. By TIMOTHY A. CLARY (AFP)

But the Vatican said Pope Francis would resume a remote, live-streamed version of his weekly general audiences with the public, "in order to avoid any possible future risk to the health of the participants".

EU leaders held a video summit on the crisis, according to European sources the first in a series of such calls to improve coordination.

The European Central Bank meanwhile pledged to bolster its pandemic stimulus in December.

Even Halloween has a Covid-19 theme this year. By (AFP)

The economic recovery is "losing momentum more rapidly than expected" after the partial rebound seen in the summer, ECB president Christine Lagarde said after a virtual meeting of the 25-member governing council.

Amongst the welter of bad news, the UN biodiversity panel warned future pandemics could be even worse, adding that they posed an "existential threat" to humanity.

The authors of a special report on biodiversity and pandemics said habitat destruction and insatiable consumption made animal-borne diseases far more likely to make the jump to people in future.

"The same human activities that drive climate change and biodiversity loss also drive pandemic risk though their impacts on our agriculture," said Peter Daszak, president of the Ecohealth Alliance and chair of the workshop that drafted the report.