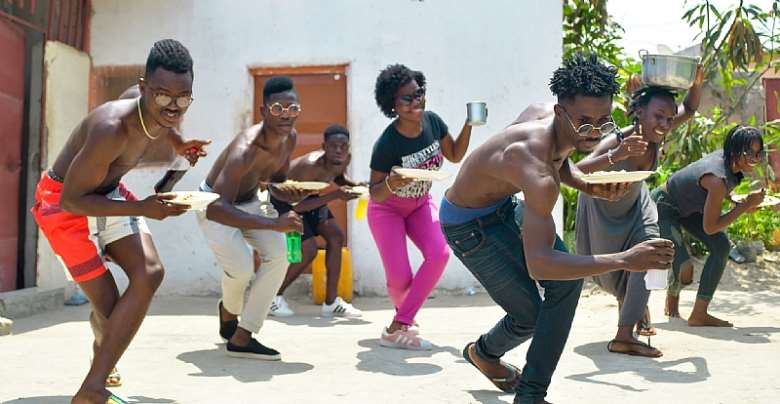 In February the Angolan dance troupe Phenomenos do Semba created the viral #JerusalemaDanceChallenge video that showed off their dance moves to the South African hit song Jerusalema . Their video is set in a backyard in Luanda, where they break into a group dance, all the while eating lunch from plates in their hands.

In the age of coronavirus, the #JerusalemaDanceChallenge video generated a counter-contagion. Almost overnight everyone from police departments in Africa to priests in Europe were posting their own Jerusalema dance videos that repeated the choreography.

The challenge videos were swept along in a message of hope condensed in the single word “Jerusalema” and amplified through an electronic beat that its creator, Johannesburg-based musician and producer Master KG , describes as “ spiritual ”.

Putting together this beat in November 2019, he invited South African gospel vocalist Nomcebo Zikode to interpret it lyrically. The magic isiZulu phrase “Jerusalema, ikhaya lami” (Jerusalem is my home) arose through their jamming. Then the Angolans provided an irresistible choreography, and the rest is history.

The Angolan dance routine is both just repetitive enough to be picked up and just varied enough to tease. Videos flew around the world on TikTok , Instagram and Facebook . Like the urge to dance to “the earliest Ragtime songs” described by Ishmael Reed in his novel Mumbo Jumbo , the dance challenge, too, “jes grew”. Angolan troupe Fenomenos do Semba's Jerusalema dance challenge.

The gift of moving collectively

“We are happy to bring the joy of dance to the whole world through this marvellous dance,” (Estamos felizes por levar a alegria da dança para o mundo inteiro atraves desta dança maravilhosa) Phenomenos do Semba declare in Portuguese on their Facebook page .

What they call “alegria da dança” (the joy of the dance) can also be read as “alegropolitics” or joy pressed out from trauma and dehumanisation. Historically, enslavement, colonialism, commodification and a continuing threat to Black life brings forth Afro-Atlantic expressive culture .

This is seen from carnivals to the viral Don't Rush Challenge , started during coronavirus lockdowns by a group of African heritage women where each dances to a hip-hop song and uses technology to “pass” a makeup brush to another.

This gift to the world is the secret of moving collectively. Not in cookie-cutter unison but through individual response to poly-rhythmic Africanist aesthetic principles that are held together by a master-structure. Dancing in this way is resistance, incorporating kinetic and rhythmic principles that circulated initially around the Atlantic rim (including the Americas, Europe, the Caribbean and Africa). It connects and revitalises by enacting an embodied memory of resistance to enslavement.

The Jerusalema dance challenge is an example of how dance enables convivencia (living together). It is a line dance (animation in French, animação in Portuguese, animación in Spanish) that enlivens parties through simple choreography that makes people dance together. Routines involve directional movement enabled by switching of feet, with dancers turning 90 degrees to repeat the choreography. Syncopated steps create enjoyable tension, and more and more people can join as the routine repeats itself till the song ends.

Many internet-driven line dances have emerged in response to songs such as Jerusalema. Created by popular music producers in Africa, they are often operating with limited resources and responding to national music trends that also have a pan-continental appeal. Think of Ghanaian azonto , Nigerian Afro-beat ; Angolan kuduro ; South African house .

The dances that develop from the music start out local but can spread from country to country. Choreographies to Ghanaian azonto hits, for example, are taught by dance instructors from Accra when they're visiting dance clubs in Cotonou in Benin – as I experienced during years of dance research in West Africa. The official Jerusalema video, viewed over 200 million times to date.

Videos shared via WhatsApp also enable such “urban” dance styles to jump borders. This is how a member of Phenomenos do Semba received a sample of Jerusalema from South African friends and shared it with his team. According to group leader Adilson Maiza, they loved it as soon as they heard it. To create a line dance choreography to a song from Johannesburg, these dancers from Luanda dipped freely into the vast reservoir of different African accents of dancing to Afro-beat music.

These accents include their own. Angola's rich social dance culture has gone global through the couple dances kizomba and the more upbeat semba . A DJ will periodically break up dancing couples with a track that unites the crowd through line dance routines that gesture to the Angolan music and dance style kuduro : hyper-exaggerated, angular, dexterous, sardonic. Kuduro steps are hard. To make the routines easier to pick up, they're mixed with generic Afro-beat dance steps.

Maiza asserts that the Jerusalema choreography mixes kuduro and Afro-beat. Others in the Angolan dance scene disagree, pointing to videos of South African pantsula and kwaito that reveal similar footwork. Master KG himself declared that what the Angolan group made viral was a South African dance style popular at celebrations. Citing him , magazine Novo Jornal observes that the Jerusalema choreography nonetheless transmits an undeniable Angolan touch. It's what Maiza interprets as signature “ginga e banga Angolana” (Angolan sway and swag).

Ginga, banga, kizomba, semba, kuduro: all Angolan words for dance styles and attitudes that, like line dances, emerge from long circum-Atlantic conversations. Line dances criss-cross the Atlantic, complicating the line between recognition and appropriation. The Danza Kuduro dance was set to a Spanish-language song responding to a Puerto Rican hit. There was the Macarena dance (Spain and Venezuela) and the Electric Slide (US and Jamaica).

A way to build community

Instead of understanding the Jerusalema dance challenge as an intra-African phenomenon, it's maybe more useful to understand it in terms of ongoing creolisation processes – a mixing of cultures – that spiral around the Atlantic rim. Multi-directional, unpredictable, but always innovative, creolisation is the motor of the “alegropolitics” of African-heritage music and dance. If the Angolan video popularised the South African anthem, this is a collaborative and competitive creolising phenomenon.

As Phenomenos do Semba morph effortlessly from eating together to dancing together, they draw on deep and resonant reservoirs of Afro-Atlantic survival through joy. The dancers' hangout is the Angolan quintal or backyard, a hub of activity during long, curfewed nights of unending civil war . However, they are eating cachupa, a typical Cape Verdean dish frequently used as a symbol for creolisation.

Like the revival of line dances during the Black Lives Matter protests, Jerusalema went viral during the coronavirus pandemic because the dance challenge enacted a simple way to connect and build community: especially at a time when people were hungering for these possibilities.

A South African singer's call, “Zuhambe nami” (join me) was realised through an Angolan dance group's brainwave to use cachupa to demonstrate that, in Maiza's words:

It is possible to be happy with little: we party with very little. (É possível ser feliz mesmo com pouco: com pouco fizemos a nossa festa.)

And, with just the resources of the body, the locked-down world partied too, for the duration of the dance.

Latest Photo Reports
Catch up with all the political quotes from our politicians.
Advertise here
More Article
ModernGhana Links
The Togo looks like West Africa’s new frontier of violent extremism
Togo looks like West Africa’s new frontier of violent extremism
10 facts to know about the current monkeypox outbreak
Nigeria's Dilomprizulike: artist who mesmerizes and befuddles in equal measure
Local Content Creation & Advertising The Sisaala Prospects: Why Champion Wan TV is An Asset To The Sisaala People.
An air of despondency dawns Africa! We can do better!
Terrorist attacks – What you need to know before and after an attack
President Buhari in Ebonyi: Why Chief Eze wept after Aviation Minister's plea to President Buhari
The Crisis in Ethiopia is not all about Ethiopia
TOP STORIES