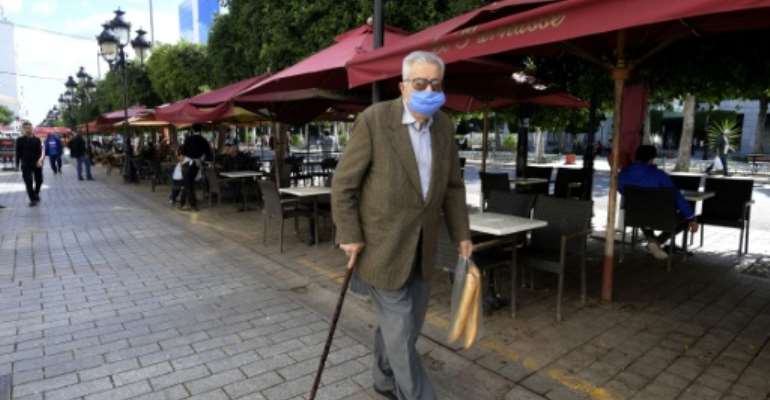 Under new measures imposed by Tunisia to stem the spread of the novel coronavirus, cafes and restaurants will be shut from 4:00 pm, and gatherings of more than four people banned in public spaces. By FETHI BELAID (AFP)

Tunisia said on Thursday it was imposing a nationwide night-time curfew, shutting schools and banning inter-region travel in a bid to halt a resurgence of the novel coronavirus.

Prime Minister Hichem Mechichi called on "all governorates to declare a curfew" from 8:00 pm until 5:00 am on weekdays and starting one hour earlier on weekends.

His statement did not say how long the lockdown would remain in place.

Tunisia had imposed strict lockdown measures that practically smothered its first wave of cases over the summer.

But since it re-opened its borders in June, infections have mounted to more than 1,000 cases a day, overwhelming understaffed and poorly equipped hospitals.

In early October, curfews were reimposed on several regions, and a week later in the Greater Tunis area.

Mechichi said the new restrictions on movement between governorates would exclude work-related travel and exceptional circumstances.

Under the latest measures, school classes would be suspended until November 8, while university students would have online lessons for two weeks.

Cafes and restaurants are to shut from 4:00 pm, and gatherings of more than four people are banned in public spaces, excluding on public transport.

Access will be denied to places of worship for two weeks.

Ilyes Jlassi, who is 23 years old and unemployed, said the new measures were "unavoidable", but now his "hope of getting a job is almost nil given the economic situation".

Abed Kader, 63, owns a shop in the capital Tunis and told AFP that "the decisions on a night-time curfew will further increase our losses".

On Wednesday, authorities warned the situation in the country had become "very dangerous", especially since so many Covid-19 patients were requiring hospitalisation.

The health ministry said it had already provided another 350 intensive care beds and was working to increase this number to 1,000 by the month's end.

In neighbouring Algeria, case numbers are also on the rise, with more than 57,000 infections and nearly 2,000 deaths recorded.

On Wednesday, Algeria's President Abdelmadjid Tebboune was transferred to a hospital in Germany to undergo "medical examinations", according to the presidency.

It had said on Saturday that Tebboune had "voluntarily" gone into self-isolation for five days after suspected coronavirus cases emerged among several officials in the presidency and government.

Anti-virus measures in the country had been eased on September 30, but a ban on gatherings remained in place.

Morocco has also seen a sharp rise in infections, recording more than 4,000 new cases per day repeatedly in recent days.

The total number of deaths in the north African kingdom has also spiked to more than 3,000.

Restrictions on travel between major urban centres has been in place since the end of July, and Morocco's hardest hit city, Casablanca, is under a night-time curfew.

A public health state of emergency has been extended until November 10.