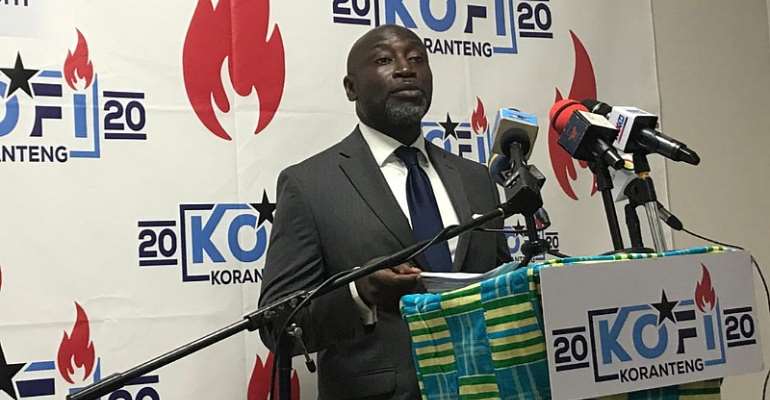 Disqualified Independent Presidential aspirant, Kofi Koranteng is seeking a chance from the Electoral Commission (EC) to correct the errors in his nomination form following his disqualification from contesting the December 7 polls.

The leader of the Independent Presidential Aspirants (IPAs) is one of 5 aspirants who have been disqualified by the EC from contesting this year’s General Elections.

According to the EC, the disqualification was made on grounds of aspirants breaching aspects of the nomination process, for which they have been referred to the police for prosecution for forgery.

At a press conference in Accra on Thursday, October 29, 2020, Mr. Kofi Koranteng emphatically denied engaging in any fraudulent activity in the filing of his nomination.

He explained that to his amazement, 19 of his endorsement appeared on the nomination forms of the CPP mysteriously after he submitted his documents to the EC.

Although he subsequently made attempts to replace the names, the EC denied him the chance and later announced on October 19 that he is one of the aspirants who has been disqualified.

Today, Mr. Kofi Koranteng says the action of the EC is robbing Ghanaians of a free democratic election. He is therefore requesting the opportunity to correct his errors just as the EC had the chance to correct their errors during the voter register compilation.

“In the recent new voter register, which the EC ordered only months ahead of the national election, there were thousands of thousands of errors in its compilation. According to the EC’s director of electoral services Dr. Serebour Quaicoe, those errors are normal. He stated that they would be rectified before or during the electoral process.

“As a candidate, I will like to be given the same fair, sensible opportunity to correct the minor errors in the paperwork of my campaign”, Mr. Kofi Koranteng told journalists at his press conference today.

Referring to President Nana Addo’s reiteration that Ghana is the beacon of democracy for Africa, the Independent President Aspirant has called on His Excellency to step in and direct the EC to do the right thing and allow him to correct the minor paperwork errors to place his name on the ballot.

He believes that if Ghana is to fulfill the 1956 promise of independence, freedom, and democracy, it must act to have a transparent, fair, equitable electoral process.

In addition, Mr. Kofi Koranteng is calling for every Ghanaian to speak up and demand that they can vote for a free, independent candidate who offers a vision for Ghana.

Meanwhile, the disqualified presidential aspirant is not ruling out taking legal action against the EC and has noted that he is receiving advice from his lawyers on the next line of action.