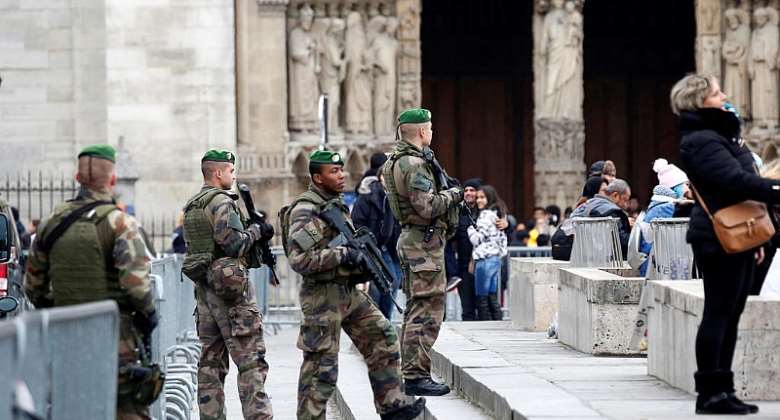 France has raised its national terror alert to the highest level after a knife-wielding man killed three people at a Catholic church in the southern city of Nice. It's the country's third suspected jihadist attack in just over a month.

France is now at "attack emergency" terror alert level – the top of the five-point scale from "no threat" to "imminent risk of serious attack".

Prime Minister Jean Castex said Thursday's attack, in which at least one victim had their throat slit, was "as cowardly as it is barbaric". Castex told parliament he had decided to raise France's Vigipirate security alert system to the highest.

This status, colour-coded scarlet, has been declared on only three previous occasions: after the killings at a Jewish school near Toulouse in 2012, after the Charlie Hebdo killings in 2015, and in the wake of the Bataclan attack, also in 2015, when a generalised scarlet alert formed part of the national state of emergency.

Immediately after Thursday's attack, which cost the lives of one man and two women, French Interior Minister Gerald Darmanin ordered the reinforcement of police and army patrols at places of worship and cemeteries.

The leader of the Roman Catholic Church, Pope Francis, prayed for the victims of the attack, as the Vatican said "terrorism and violence can never be accepted".

"Today's attack has sown death in a place of love and consolation. The Pope is aware of the situation and is close to the mourning Catholic community," Vatican spokesman Matteo Bruni said in a statement.

The Pope "prays for the victims and their loved ones, so that the violence may cease, so that we may return to look upon ourselves as brothers and sisters and not as enemies, so that the beloved French people may unite to combat evil with good", he said.

Police sources have meanwhile confirmed that a man wielding a knife was shot dead by security officers in the southern French city of Avignon.

At 11:15 on Thursday morning, police were confronted a man carrying a knife. When he refused to drop his weapon, he was flash-balled but continued to advance. Officers then used their handguns and the suspect died on the spot.

An internal police investigation has been launched.

The authorities say they are remaining open-minded about the possible motivation of the dead man but, for the moment, have no reason to suspect him of attempting a terrorist crime.