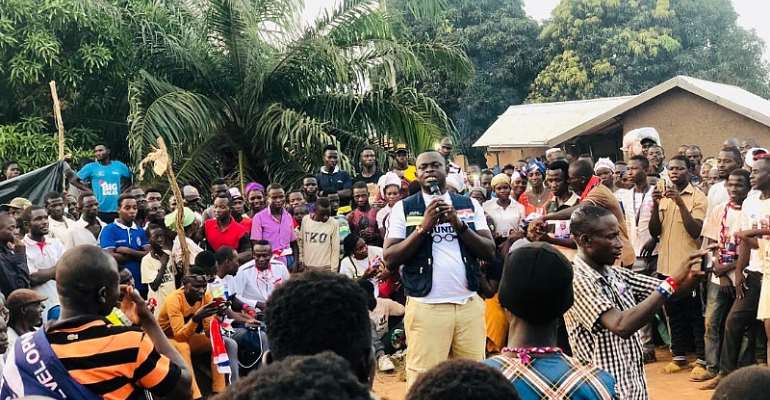 Upon hearing that the NPP Oti Regional Youth Wing Touching Base with the Constituencies campaign team will be storming Sibi a suburb of Kpassa in the Nkwanta North District, the NDC in a panic reaction organized a meeting in Sibi to thwart the team's effort of mobilizing in that community.

Unbeknownst to them, the community members especially the Youths have long severed ties with the opposition NDC in the community. They have discovered a good husband that has transformed their lives and their families through various government interventions.

The visibly angry Youths who ditched the NDCs meeting to attend the mammoth meeting of the NPP took their turn with speaker after speaker recounting how the NDC has treated them badly over the years even upon their loyalty to them. They shared testimonies of how their children and relatives have benefited from the Akufo Addo government.

The Oti Regional Youth Organizer, King David Nkanbonam on behalf of the NPP welcomed them to the Party and assured them that the government will do more for them when they vote for H.E President Nana Akufo Addo and Hon. Benjamin Nador as Member of Parliament for Nkwanta North Constituency.

It can be recalled that the Nkwanta North seat is currently with the opposition NDC led by Hon. Oti Bless who many think has performed below average and are not ready to renew his mandate as a Member of Parliament.